The most active investor in India is a Mumbai-based company that was a former startup and has invested in 76 different companies.

Since 2012, this Mumbai-based company has invested in 76 different companies, making it the most active investor in India, a report by CB Insights said on Thursday.

From investments in companies like Taxi For Sure to Grey Orange Robotics, Blume Ventures was named as the ‘Most Active Investor’ in Indian tech companies by the report.

“The biggest round Blume Ventures participated in was a $30 million Series B in 2015 to warehouse automation systems provider Grey Orange Robotics,” the report added.

With the year of 2016 marking its fifth consecutive annual high for equity deals to tech companies in India, there were 965 deals up from 881 the previous year, an earlier report by CB Insights dated June 22 said.

Following Blume Ventures, Indian Angel Networks ranked second with an investment in a total of 64 companies.

“Angel groups, which bring together a network of angel investors, were some of the most active investors in India. The Mumbai Angels Network came in fifth, closing deals to 48 companies,” the report said.

In third place was Accel Partners India and Sequoia Capital India that both invested in 55 companies, with no overlap, the report said.

While Accel Partners has invested in Flipkart, food delivery company – Swiggy and Flipkart owned Myntra among others.

“Some of Accel’s recent notable investments include its participation in Flipkart’s series J round for $1.5 billion in March 2017 and food delivery app Swiggy’s $80 million Series E round in May 2017,” the report said. 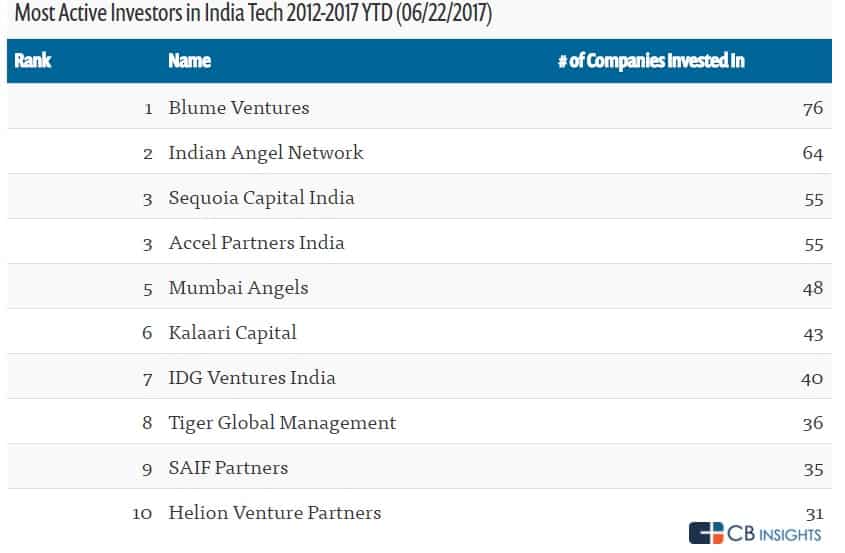 “Not included in our ranking are individuals who were also highly active, including Rajan Anandan, the VP of Google India and Southeast Asia, who closed 39 deals – slightly more than Tiger Global Management. Other active individuals were People Group CEO Anupam Mittal at 25 and Ratan Tata, the former chairman of Tata Group, who invested in 24 different companies,” the report said.