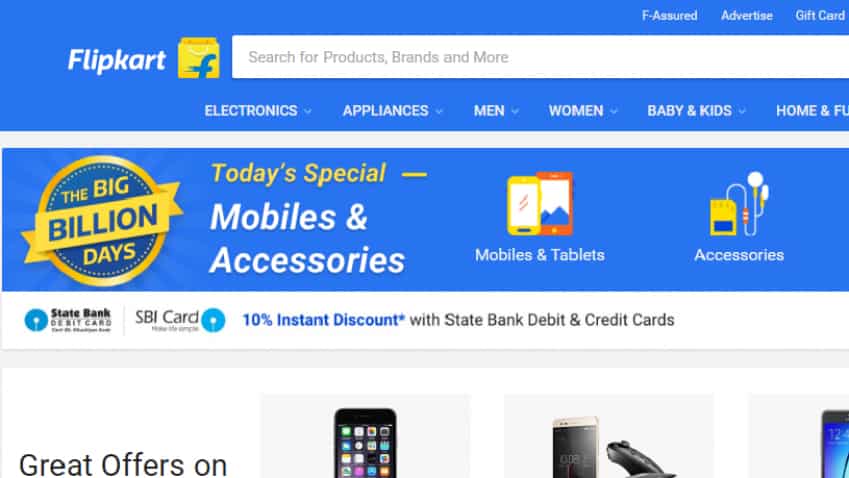 Flipkart claimed that it sold over half a million products within one hour on Day 1 of the sale. Representational image of Flipkart's website. Image Source: Official Website

E-commerce majors Snapdeal and Flipkart on Sunday claimed lakhs of transactions on their platforms on the first of the five-day discount sales on Sunday even as some consumers expressed woes on the social media about certain glitches.

Amazon, which started its five-day special sale on October 1, on Sunday said it has seen six times growth over its regular business. It has claimed to have sold 1 lakh product units in first 30 minutes, 15 lakh units in first 12 hours on first day of the 'Great Festival Day' sale.

Snapdeal, in a statement, said, "Nearly 11 Lakh buyers from over 2,800 cities and towns across India bought at Snapdeal in the first 16 hours of the sale. The sale which started at midnight with 180 orders being booked per second got bigger during the day as buyers used the national holiday to explore a plethora of attractive deals."

It said that based on the trends from Day 1 of the sale reflect sales volume jumping six times of average volumes by 4:00 pm (IST) on Day 1.

Flipkart claimed that it sold over half a million products within one hour on Day 1 of the sale.

"Within the electronics and gadget category, we sold more Apple watches in 10 minutes than the total sale of Apple watches online and offline in a month," Flipkart said in a statement.

Flipkart said that the number of product units sold in the first six hours of sale surpassed the total units sold in a day during the first day of its 'The Big Billion Days' in 2015.

Snapdeal is running the sale as 'Unbox Diwali'.

Meanwhile, consumers on Twitter complaint that there were hardly any discount on the products that these companies are offering.

The online shopping festival of Amazon, Flipkart, Snapdeal is more about discounting myth, marketing gimmick without much substantial offers, said a Twitter handle.

However, the authenticity of the claims on micro-blogging site could not be verified.

Some consumers even posted screenshots showing that a product was priced higher on the sites they were shopping on, compared to the other sites.

Some media sites and Twitter accounts complained about glitches in Flipkart and Amazon payment gateways. Amazon displayed on the site that "State Bank of India (SBI) and Associate banks netbanking are having payment issues".

There was no immediate response to queries sent to online players as well as the banks concerned.

"Once again the online retailers have begun their agenda to flout the FDI policy right under the nose of the Government and it is sad that no action is being taken against them for violation of the FDI policy," the Confederation of All India Traders (CAIT) said in a statement.

This is the second time after the release of FDI policy 2016 when such violations are openly done by online retailers and CAIT will approach Prime Minister and Finance Minister against these sales, the statement said.

"As per FDI policy, it is clearly established that online retailers who have received foreign direct investment (FDI) will act as marketplace only where they will provide technology platform and in no way they can influence the prices and also they are under obligation to maintain level playing field," CAIT said.

In a response later to the queries raised, Flipkart spokesperson said, "We saw an extreme spike in traffic leading to a slight interruption in the payment gateway. But 'The Big Billion Days' extravaganza continued, and saw customers stacking up products in their carts and making the most of other payment options such as cash on delivery."

According to senior official of SBI, the "site of the bank is fine and working".