As per the agreement, SoftBank will invest USD 45 million for a 49.99 per cent stake in Diphda while InfoEdge will invest a similar amount for the remaining stake. PolicyBazaar.Com has raised a total of USD 366 million through half a dozen funding rounds, excluding the seed funding round, the company spokesperson said. 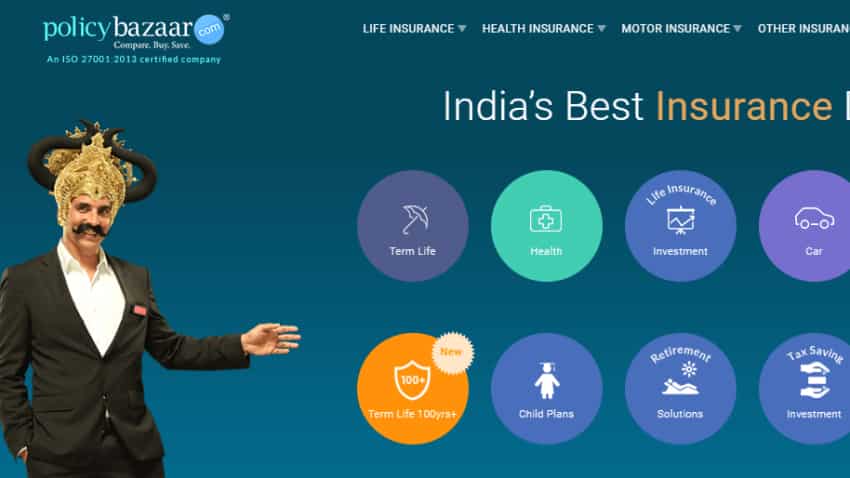 Insurance portal PolicyBazaar has raised over USD 200 million (around Rs 1,360 crore) through a fresh round of investment led by Japan's SoftBank, in a deal that is expected to secure the online insurance aggregator a place in the coveted Unicorn club. ETechAces and Consulting -- which operates PolicyBazaar.Com -- said in a statement today that it has clinched over USD 200 million in an investment round led by SoftBank Vision Fund, with participation from existing investors, including InfoEdge (Naukri.Com).

According to sources, the current valuation of the company is pegged at over USD 1 billion with the latest transaction. When contacted, a company spokesperson declined to comment on the valuation but said part of the funds would be used to grow the lending, investment and insurance business along with new initiatives such as healthcare tech and services and international expansion.

Generally, a unicorn is a privately-held online startup valued at over USD 1 billion. The celebrated tech Unicorn club in India already has names like Flipkart, Paytm, Ola, Byju's, Zomato and Hike. Only last week, food delivery platform Swiggy raised USD 210 million (over Rs 1,430 crore) in fresh round of funding led by Naspers and DST Global, reportedly entering the unicorn club.

PolicyBazaar.Com, which enables people to buy insurance online, hosts over 100 million visitors yearly and records sale of nearly 300,000 transactions a month, as per the statement.

Meanwhile, InfoEdge, in a BSE filing, said it has signed an agreement with SoftBank to jointly invest USD 90 million in Etechaces Marketing and Consulting for a 8.93 per cent stake on a fully diluted basis. Further, the filing said the investment has been structured through Diphda Internet Services.

As per the agreement, SoftBank will invest USD 45 million for a 49.99 per cent stake in Diphda while InfoEdge will invest a similar amount for the remaining stake. PolicyBazaar.Com has raised a total of USD 366 million through half a dozen funding rounds, excluding the seed funding round, the company spokesperson said.

PolicyBazaar's statement cited a report by Boston Consulting Group (BCG) to state that digital influence on insurance purchases will grow to 50 per cent for life insurance and 75 per cent for general insurance by 2020.

This translates to nearly Rs 1,20,000 crore of new insurance premiums being digitally influenced by 2020, it said. "PolicyBazaar believes this will enable it to grow at a CAGR of more than 80 per cent over the next three years achieving 10 million transacting customers by 2020," it added.

Commenting on the fund raising, EtechAces co-founder and Group CEO Yashish Dahiya said, "SoftBank's culture of backing disruptive businesses and industry leaders with long-term capital investment gels well with our own values and vision of creating a transparent and empowering financial products marketplace". "We hope to gain a lot from their global footprint and experience,? he added.

"We believe that the Indian insurance market continues to remain massively under-developed and PolicyBazaar, supported by SoftBank's capital and ecosystem, is uniquely positioned to dramatically increase the adoption of insurance products in the country," SoftBank Investment Advisers Partner Munish Varma said.

Softbank has investments in a number of Indian startups including Ola, Oyo and Paytm Mall. It had also invested in e-commerce major Flipkart but has decided to sell its stake in the company to retail giant, Walmart recently.