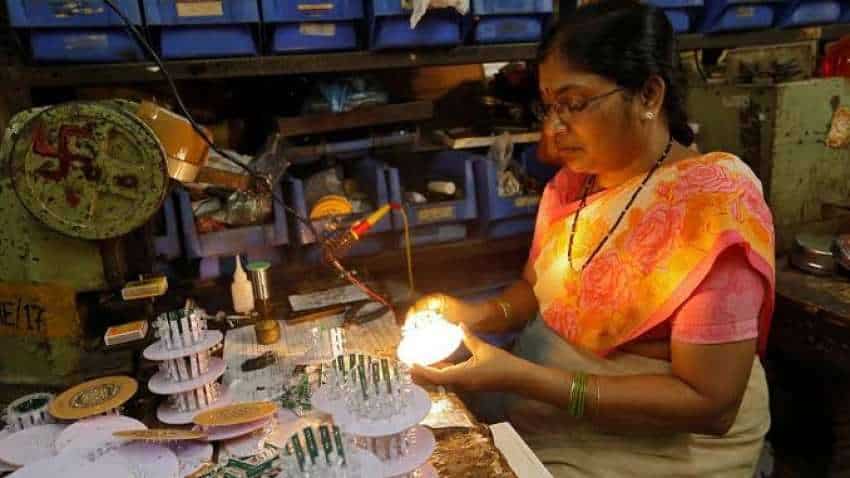 For an MSME to be defined as a Small unit, FM Sitharaman raised its investment limit from Rs 5 crore to Rs 10 crore with a turnover of less than 50 crore. Photo: Reuters
Written By: Asit Manohar
Edited By: Prashant Singh
RELATED NEWS

Addressing the media today in New Delhi, the Finance Minister Nirmala Sitharaman redefined MSME (Micro, Small and Medium Enterprises). For an MSME to be defined as a Small unit, FM Sitharaman raised its investment limit from Rs 5 crore to Rs 10 crore with a turnover of less than 50 crore. Sitharaman also declared that there will be no more distinction between Manufacturing and Service MSMEs. The move is in sync with the Aatma Nirbhar Bharat Abhiyan announced by Prime Minister Narendra Modi yesterday while announcing Rs 20 lakh crore stimulus package.

"Definition of MSMEs is being changed in favour of the MSME," said Nirmala Sitharaman while giving details of the Rs 20 lakh crore stimulus package announced by PM Narendra Modi yesterday. Sitharaman went on to add that the new definition of MSMEs does not differentiate between a manufacturing enterprise and a service sector enterprise.

Hailing the move Rajnish Kumar, Chairman at Sate BAnk of India (SBI) said, “The policy bouquet unveiled by the Government is well-structured, suitably targeted, within reasonable fiscal limits but still having the maximum impact. The measures for MSME through guarantees, equity infusion and debt support will incentivize bank lending to MSMEs as well as providing crucial support to stressed entities in the current situation. The proposed definitional change for MSME sector based on turnover is progressive and is perfectly synchronized with the GSTN framework."

Highlighting upon the new job opportunities coming in after the change in MSME definition Nitin Shahi, Executive Director at FINDOC Group said, "Government’s first tranche of relief has been issued to the much-needed sectors specifically MSMEs which are employment generators. This should give a restart to the economy.  Government has also taken a few welcome steps by easing definition of micro, small and Medium enterprises for the benefit of entrepreneurs."

Definition of MSMEs gets a revision, Investment limit to be revised upwards, additional criteria of turnover also being introduced#AatmanirbharBharat pic.twitter.com/euRNgiPJeB

Speaking on the benefits of ease in credit line to the MSME after this change in MSME definition Anuj Puri, Chairman at ANAROCK said, "In a major move to revive the MSMEs, the FM tweaked the definition of such companies to provide benefits to many more units. The collateral-free automatic loan for MSMEs worth Rs 3 lakh crores will give a lifeline to nearly 45 lakh units for four years. With this, the government aims to curtail job losses, and this could indirectly benefit affordable housing. Fear of job losses may have caused many potential affordable home buyers to defer their purchase decisions."