The MSME NATIONAL SUMMIT AND AWARDS 2021 is focusing on important sectors and their challenges to combat the COVID crisis, and find new growth opportunities 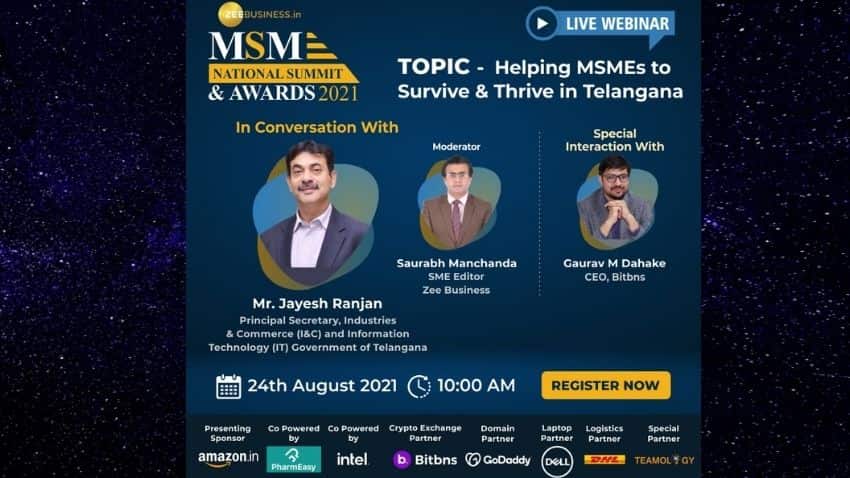 Through the MSME National Summit and Awards 2021, we are emphasising on exploring new opportunities in challenging times. After analysing the pulse of many sectors, we are focusing now on the states. Today it is the turn of India's youngest state Telangana. We had a special conversation with Jayesh Ranjan, Principal Secretary Industry and Commerce, Information Technology, on the policies related to micro, small and medium enterprises (MSMEs) in the state, their challenges, new opportunities before them. We have also included suggestions from MSME industry leaders of Telangana during the program. Ranjan sided with the government on the suggestions of the industry.

Speaking on the issues of liquidity and cash flow of MSMEs, Ranjan said that in the first wave of the COVID, entrepreneurs had to face many problems in their businesses. Along with this, a significant impact was also seen on the supply chain. He said that even on the workforce front, entrepreneurs had to face problems. But during the second wave, where most of the states were under lockdown, Telangana, taking the cue from the first wave’s experience, decided to keep the industries running in the state.

A large number of MSMEs are present in Telangana. And the state has a special identity with the IT sector. To provide handholding to MSMEs that are present in the IT industry in the state, Ranjan said that the government has taken various steps to provide relief to the MSMEs of this sector in this situation. The relaxation on property tax, electricity charges are included. At the same time, MSMEs operating from IT towers in the state have been given relief on the rent front in government buildings. Due to which the government has waived the rent of these MSMEs for a stipulated time.

At the same time, mentioning other potential sectors of the state apart from the IT sector, Jayesh Ranjan laid special emphasis on the life sciences and pharmaceuticals sectors. He said that the government is going to set up the world's largest industrial park for life sciences.

This industrial park will be spread over 20,000 acres and will be known as Hyderabad Pharma City. A major part of the park will be reserved for MSMEs. Along with this, common facilities will also be made available for them.

Speaking on skills, Ranjan said that MSMEs have to struggle with quality skills while competing in the domestic and global markets. And in such a situation, the state government is giving special emphasis on this issue through the skilling program.

Speaking on the trends in cryptocurrencies in India, Gaurav Dhake, CEO, BitBNS, said that there is a growing interest among people in digital assets, cryptocurrencies. As far as crypto is seen as an asset class, a new generation trend is being seen in it.

Speaking on the mature markets of the world like the US, Japan, Dhake said that crypto has made its mark as a major asset class in these markets. At the same time, an uptick curve is being felt in this direction in India.