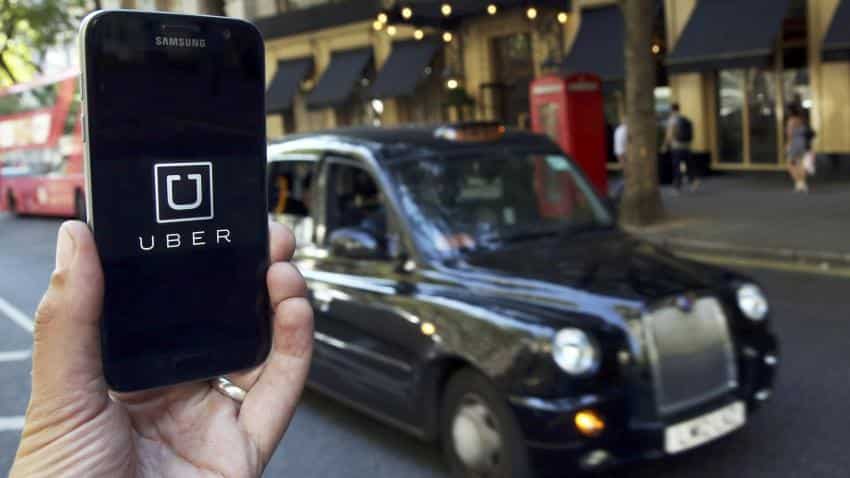 A photo illustration shows the Uber app logo displayed on a mobile telephone, as it is held up for a posed photograph in central London, Britain, on August 17, 2016. Image Source: Reuters/Neil Hall/Illustration
Written By: PTI
RELATED NEWS

Taxi-hailing aggregator Uber on Thursday said the West Bengal transport department has been issuing a limited number of commercial licences, leading to a lesser number of cars joining its platform in the state capital.

"Not many cars are joining the Uber platform in Kolkata for the last six months. The state transport department has been issuing commercial licences in a restricted manner which has been the cause," Ashwin Dias, GM (east) of Uber India, told PTI.

Dias said that Uber had already obtained the On Demand Technology Transportation Aggregators (ODTTA) permit from the transport department, adding that cars willing to join the platform would have to first obtain the commercial licence.

"Commercial licences are not being given like before. Since the last six months, there has been a substantial fall in the number of cars joining Uber," he said.

He said that Uber was in talks with the transport department, adding that ensuing festival season was a major cause of worry when the demand for such hailing services increases.

Uber, which started operations in Kolkata two years back, had helped around 10,000 individuals to generate income by joining the platform.

"We also have many partners who had availed of the state government's 'Gatidhara' scheme where a subsidy of Rs 1 lakh was being given for purchasing a vehicle," Dias said.

"In Kolkata, we will like to have more cars. During Pujas, we are expecting a lot of cars, but we are not seeing the visibility in the number of cars," he said.

Dias said the target was to open 20,000 more such economic opportunities in the next two years subject to the state government relaxes the restriction in the issue of licences.

On the contentious issue of surge pricing, he said, "Our intention is to minimise surges. It is a practice which is followed by Uber worldwide."

"We are also planning to encourage women to join the Uber platform as partners," he said.