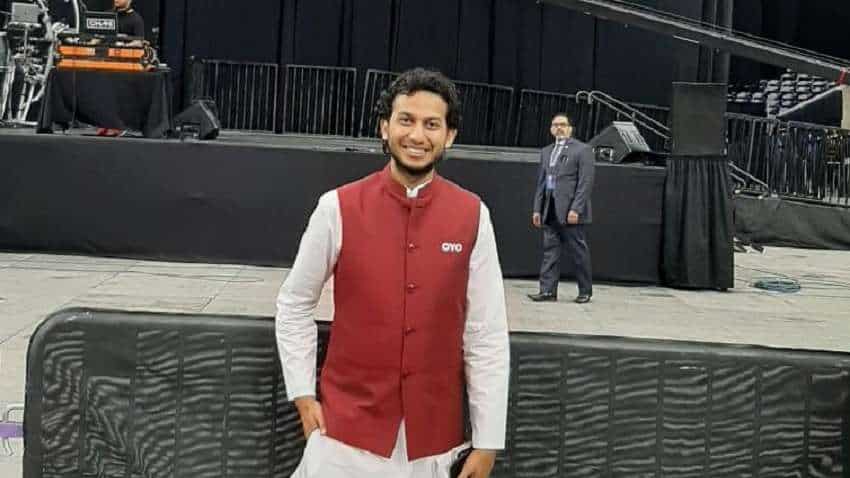 The 24-year-old is only behind Kylie Jenner. Source - Reuters.
Written By: ZeeBiz WebTeam
Edited By: Harish Dugh
RELATED NEWS

OYO lays off around 300 employees

Hurun Rich List 2020: Oyo Hotels founder Ritesh Agarwal is now the world's second-youngest billionaire with an estimated wealth of $1.1 billion ( Rs 7,800 crore), according to the Hurun Global Rich List 2020. The 24-year-old is only behind Kylie Jenner who has also amassed $1.1 billion at the age of 22. Agarwal is also the richest self-made Indian aged under 40.

Agarwal was among the Indian business leaders US President Donald Trump met during his 36 hours of India trip. The US president also lauded the Oyo founder. After Agarwal introduced his company Oyo to the US President, Trump responded: “Not such a small company, by the way good job.” The Softbank-Oyo has its presence in the United States too where it bought Hooters casino hotel in Las Vegas for a whopping $135 Mn, marking company’s first major investment in the U.S.

The other self-made Indian billionaires on the list are Zerodha founders Nithin Kamath and Nikhil Kamath, both in their 30s, Flipkart co-founders Sachin Bansal and Binny Bansal ($1 billion each) and Byjus' Raveendran family ($1.4 billion). The young and rich list has 90 billionaires aged 40 or under, up 5 from last year.

Out of these, 54 billionaires are self-made while 36 inherited wealth. The list is dominated by billionaires from China and USA -- both countries with 25 names on the list. A total of 137 Indians are billionaires as of now, up by 33 from last year. With a wealth of $67 billion, Reliance Industries chairman Mukesh Ambani is the richest man in India and the ninth richest in the world.

Among cities, Mumbai has the largest number of billionaires (50) in India while Bengaluru has 17, Ahmedabad 12 and Hyderabad 7.

OYO lays off around 300 employees