Men have leaped from shopping for smartphones and consumer electronics online to footwear and apparel. Fashion heads at Amazon and Flipkart share views of consumer traffic on their sites with Zeebiz. 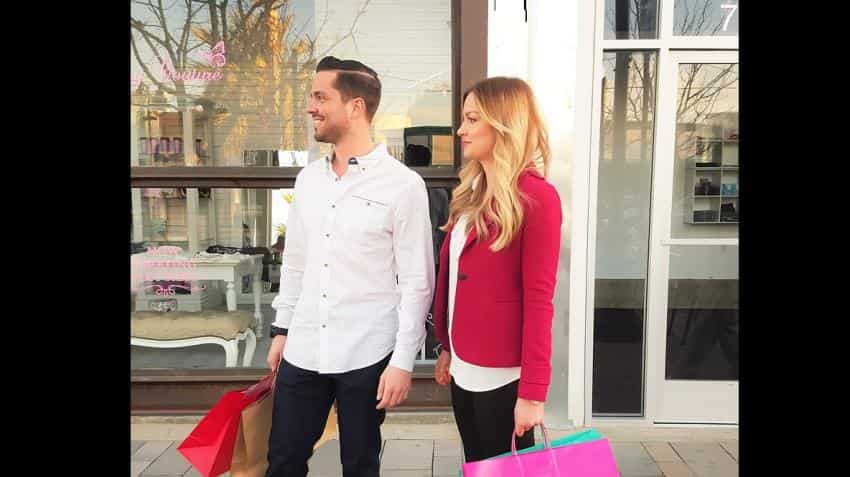 Nearly 80% of men spend on e-tailing while only 20% women do the same. Image Source: Pixabay
RELATED NEWS

The clichéd version of the ‘tired’ man-friend, who waits endlessly for his female counterpart to decide between two similar looking pairs of shoes or an overpriced cashmere sweater may no longer hold true.

In fact, men might enjoy shopping just as much as women or maybe even more!

With the increasing choice of fashion and apparel available online, the e-commerce sites in India have noticed an increasing demand from its male customers.

“Today we offer top of the line brands for both men and women and witness 60% orders from men and 40% from women on Amazon Fashion,” Arun Sirdeshmukh, Head, Amazon Fashion told Zeebiz.

The company claimed to have two million fashion products and 15,000 fashion brands.

Amazon said that majority of its brands saw a spike of over nine times growth across categories.

“Almost 30% new customers for Amazon.in come from Amazon Fashion. Our apparels category is one of the top performing categories on amazon.in and was the highest selling product category by units, for

Home grown e-commerce website – Flipkart also said that they have had increase in traction from both men and women during its recently concluded Big 10 sale.

On celebrating its 10 year anniversary, Flipkart was promoting deals on consumer electronics like Samsung Galaxy, Google Pixel, Apple iPhone 6S, Panasonic HD TV, Air Conditioner brands and Moto G5 Plus all with discounts up to 15-20%.

This led to increase in men’s apparel sales and footwear.

“On day 2 of the sale (May 15), Flipkart was seen promoting deals on mobiles which led to a huge spike in sales of relevant cross categories like men's clothing and men's footwear,” Rishi Vasudev, Head, Flipkart Fashion said.

However, sales were favourable in garnering female attention as well.

“There has been a 3x increase in female shoppers on Flipkart Fashion as compared to non-sale days on the back of several attractive offers across fashion categories for women,” Vasudev added.

He further added, “Flipkart Fashion in particular has been a force multiplier for us and we are seeing more and more customers shop across men’s, women’s and kids fashion.”

The company claimed to offer 99% of styles on sale.

“Over 40% of Flipkart Fashion’s offerings during the sale are special merchandise units exclusively developed by well established brands for Flipkart, across men’s and women’s fashion such as Lee, Wrangler, Puma, Woodland, Fossil, Carlton London, Chemistry and Ferrari to name a few,” Vasudev said.

Though men may not be too indecisive over that cashmere sweater they sure do spend more on e-commerce website in comparison to women.

A report by Credit Suisse on January 12 showed that 80% men spend on e-tailing as compared to 20% women. 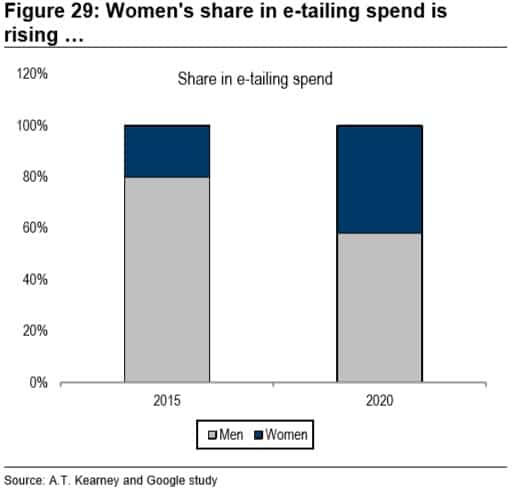 The report also cited a survey that showed 50% female shoppers prefer to browse in the fashion categories of e-commerce sites while 64% men preferred electronics. 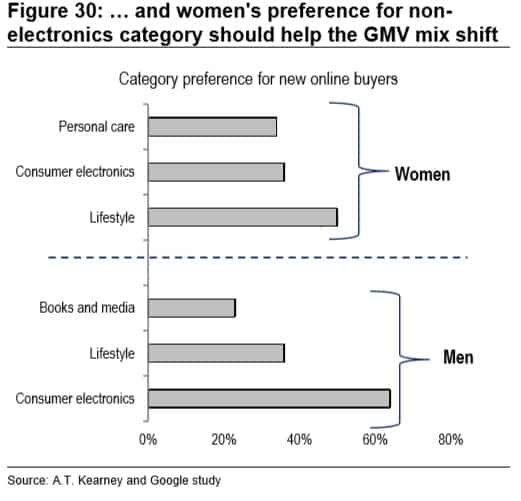 Only 40% men like to buy apparel online and 40% women prefer to spend on consumer electronics.

Women are still to increase spends on e-tailing and electronics.