Within just a few months, the scenario has changed so much that gold, which was easily available near Rs 34,000, has clocked an all-time high of over Rs 36,000 in India. 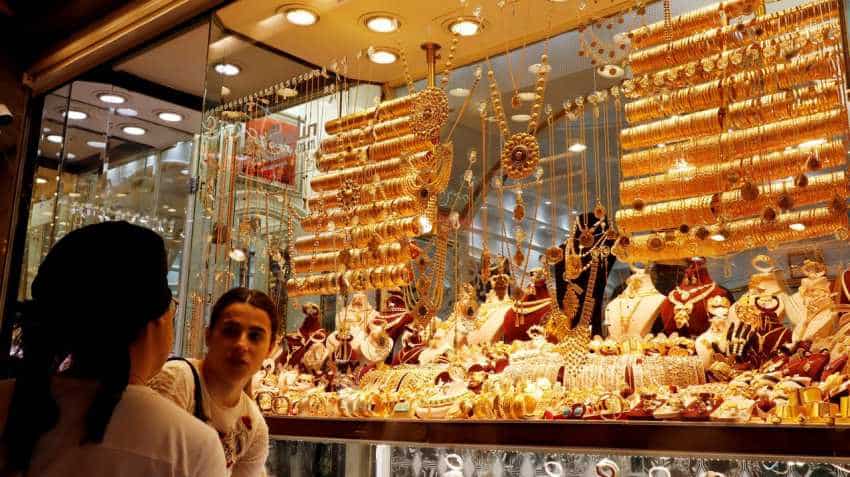 Each coming day, gold price is soaring to new highs across major cities in India. Within just a few months, the scenario has changed so much that gold, which was easily available near Rs 34,000, has clocked an all-time high of over Rs 36,000 in India. It’s very expensive now to buy gold, and neither citizens nor investors are happy, and this is fueling demand concerns! Although not all are suffering, as the ones who have invested in yellow metal earlier are in the profit zone. However, for the rest, the upswing seems set not to pause. In fact, this may just be the beginning. Gold price is set to surprise, by soaring further for those who want to buy. This may well be a dampener during festive season as well!

On the global front, however, the spot gold tumbled by 0.2% at $1,422.74 per ounce, as investors were cautioned over sharp interest rate cut in US policy by the end of this month. In previous trading session, spot gold ended at $1,450.

Profit booking in domestic equity markets like Sensex and Nifty were among the major reasons which made gold a profitable asset. On Monday, the Sensex ended at 38,031.13 down by 305.88 points or 0.80%. In fact, Sensex also clocked below 38,000-levels, by touching an intraday low of 37,890.32-level. Gainers on this index were - Yes Bank, Vedanta, Asian Paint, Reliance Industries, Maruti Suzuki, Sun Pharma and ONGC. While the losers list involved HDFC, HDFC Bank, Kotak Mahindra Bank, HUL, Bajaj Finance and ITC. On the other hand, Nifty 50 plunged by 82.10 points or 0.72% ending at 11,337.15.

Further, markets are convinced that a rate cut picture lies ahead in US policy, which will create hindrance in global markets and forex and hence will make gold even more attractive investment.

As per the Fed Rate Monitor tool of Investing.com, markets are convinced there will be at least a quarter-point cut and there's a 60% chance that the rates will be 50 basis points lower after the September policy meeting.  Not just US Fed, other central banks worldwide have taken an increasingly dovish stance, hinting at further rate cuts.

Expert at World Gold Council in their research note said, "The experts said in the note, “The prospect of lower interest rates should support gold investment demand. Our research indicates that the gold price was higher in the 12 months following the end of a tightening cycle. Moreover, historical gold returns are more than twice their long-term average during periods of negative real rates – like the one we are likely to see later this year. At the same time, the US dollar – usually a headwind for gold – may remain range bound as trade tensions and lower rates offset continued economic growth.”

Also, among major large investors of gold are also central banks of major economics who have turned net buyers further driving the prices up. On the other hand, recently the International Monetary Fund (IMF) body has raised flag over economic slowdown ahead in their world economic forum. Golds are seen as safe haven assets which help investors in minimising risk against political and economic uncertainty.

While geopolitical tension and trade war also played their role in making gold a better option for investment. In latest development, tensions have escalated in the Middle East regions.

Rise or Drop ahead in gold price?

Sanjeev Prasad, Sunita Baldawa and Anindya Bhowmik, Research Analyst said, “The government’s decision to raise customs duty on gold to 12.5% from 10% will result in additional Rs 40-50 bn of revenues. However, it will increase the domestic price of gold by 2.5% and revalue the entire stock of gold with Indian households by the same amount.”

In Budget 2019 speech, Finance Minister Nirmala Sitharaman hiked gold custom duty to 12.5% from previous 10%. Interestingly, many hoped for reduction in customs duty to 5%, but sadly received a major setback!

While the government is well placed to earn hefty from custom duty hike in gold and other precious metal items, it would be end users who will face pressure as companies will pass on the burden of tariff making the yellow metal expensive.

However, the trio points out that, it would have been better to increase GST rate on jewelry, which could reduce the appeal of gold and precious stones as an investment class.

At present, the government has levied GST rate of 3% on gold and jewelry items. Further, there are additional charges of 5% as GST imposed on making charges of gold ornaments.

The trio said, “ The value of gold jewelry for a buyer will be the price of gold jewelry less the GST paid on gold jewelry. India has been ‘exporting’ its savings through large imports of gold and precious stones and has to rely on foreign capital to bridge the gap between savings and investment (CAD). Incidentally, India’s net imports of gold have exceeded FPI inflows by US$100 bn over FY2011-19.”
In the experts at World Gold Council’s view,  if the higher levy were to become permanent, it could reduce long-term Indian consumer demand by slightly less than 1% per year.

Well how many new heights the gold price is capable of touching will be keenly watched. Earlier, SMC in its research note stated that, in India, Gold can further move higher towards 35500 while taking support near 33800 while silver can test 40000 while taking support near 37800. Honestly, it would not be surprising, if gold actually reaches to such level, as both global and domestic economic front are playing spoilsport for gold buyers. But definitely the already invested in gold, will enjoy much higher returns on their gold. New buying however will be affected!