Currently, gold is going through a massive buying spree amid amid present and future global equity market concerns. 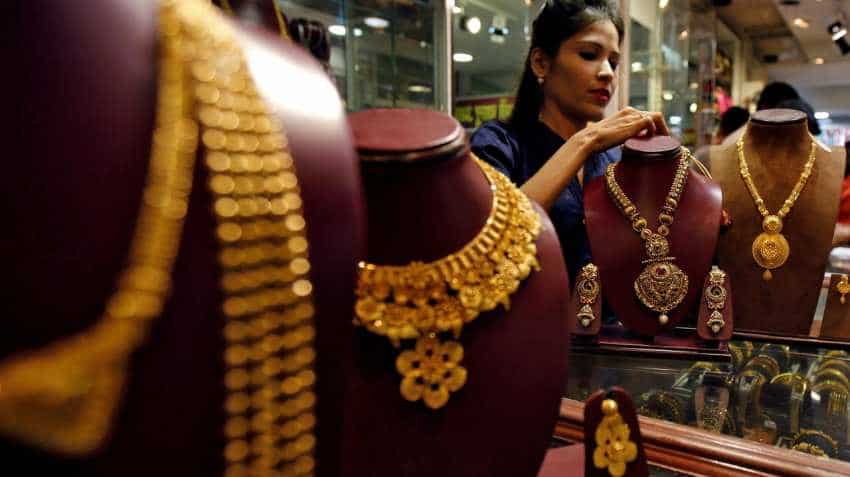 The second half of 2019 has created a dire situation if you were thinking of opting for buying gold. Photo: Reuters

Tension between US and China, central banks rate cuts across globe, bearish stock exchanges are some major reasons as to why buying gold in India may remain just a dream in the foreseeable future. It’s the time of festive season, with Ganesh Chaturthi right around the corner and one can already see great enthusiasm on streets with citizens purchasing idols in multitudes. Then there comes Diwali season which fuels gold purchase spree. However, this time it is likely to be different. Gold, which has already earmarked a record over Rs 39,000 price level in cities like Mumbai, Chennai among others, is now racing towards Rs 40,000! The second half of 2019 has created a dire situation if you were thinking of opting for buying gold.

Currently, gold is going through a massive buying spree amid amid present and future global equity market concerns. So, there’s nothing wrong with gold. But at the same time, it is dampening demand for most people! The October gold contract was near Rs 37,995 per 10 gram on MCX. But cities like Chennai, Mumbai Bhubaneswar, Mangalore, Visakhapatnam and others already saw over Rs 39,000 market value last week in 24 karat of 10 gram.

Also, the stubborn rise of gold prices, have impacted gold import. Sumedha DasGupta, Research Analysts at ICICI Bank explained that, gold imports have been largely plagued by high prices, as gold gathers sheen as a safe haven amid turbulent market triggers. Rising prices were not the sole reason, as the analyst pointed out that the recent increase in customs duty could also have dented appetite for gold.

The gold custom duty in India, have been increased to 12.5% from previous 10%. Experts have already indicated that such hike in duty, will result in some 2.5% rise in gold prices at home. That said, global concerns which seems to not end anytime soon, coupled with custom duty hike have played a spoilsport for end users who are looking to buy gold during upcoming festivals.

Meanwhile, on the global front, gold prices breached over $1,500 levels which was last seen in 2013. This year till date, gold prices have rocketed by 17% in value becoming the highest yield asset class among its peers.

Explaining the sudden uptick in gold prices, Priyanka Jeph, Research Analysts at ICICI Bank stated that, investors are flocking to the safe haven commodity as concerns around global growth slowdown have intensified due to escalating trade tensions between US and China especially after the latest round of tariff hikes. The sharp movement in the Yuan beyond the psychological 7 mark against the Dollar and the subsequent labelling of China as a “currency manipulator” by the US has also weighed on sentiment. Global bond yields have fallen to record lows and a substantial amount of global bonds are also trading in negative yield territory. Global monetary policy backdrop has witnessed sharp pivots and a whole host of Central Banks across the globe including the Federal Reserve have embarked on rate cutting cycles.

Jeph added, this move is significant, especially in light of the fact that gold prices have remained in the doldrums for a considerable period of time now. Trends closer home are also quite sharp, with gold prices trading in MCX India hitting a lifetime high this week.

In fact, an interesting relation between gold, dollar index and inflation rate was highlighted by Jeph. It was known that, usually during  episodes of Dollar strength gold is not expected to perform well. However, the global growth framework is such that the Dollar index is unlikely to weaken sharply as all other regions on a relative basis are also slowing fast, hence there is scope for both trends to coexist for a while.

Since decades, gold has been considered a hedge against inflation. Thus, since over the last few years Jeph states that, they have seen almost no negative shocks for inflation (despite oil price spikes), gold as an asset class would have been less tempting.

But lately, considerably long global business cycle shows signs of ending, which seems to portray that the yellow metal has regained its long enduring appeal after all.

Anuj Gupta of Angel Brooking told IANS, "Demand for the precious metal may slow down slightly owing to some easing in trade tension between US and China, but over the trend is negative. We see gold prices around Rs 39,000 to 40,000 per 10 gram by Diwali." He said that the gold prices were surging primarily owing to the decline in global growth rate.

Pointing out, why gold will continue to rise even in the second half of 2019, Jeph said, “the outlook for safe haven assets such as the Yen, Swiss Franc and gold continue to look more promising against the riskier assets, amid growing uncertainty. The markets are already pricing in an additional 50bps rate cut by the Fed this year."

Further, according to Jeph, even  accommodation by central banks is likely to reduce the opportunity cost of holding gold and growing uncertainty due to escalating political uncertainties including trade wars, Brexit etc. are expected to dent the risk appetite of investors and will thus keep space for the precious metal in their portfolio.

However, any sharp improvement in risk sentiment may result in downside risks to gold prices but sustainability of the same, as per Jeph has to be evaluated.