Tata Group turmoil: Is it time to rejig your mutual funds portfolio? 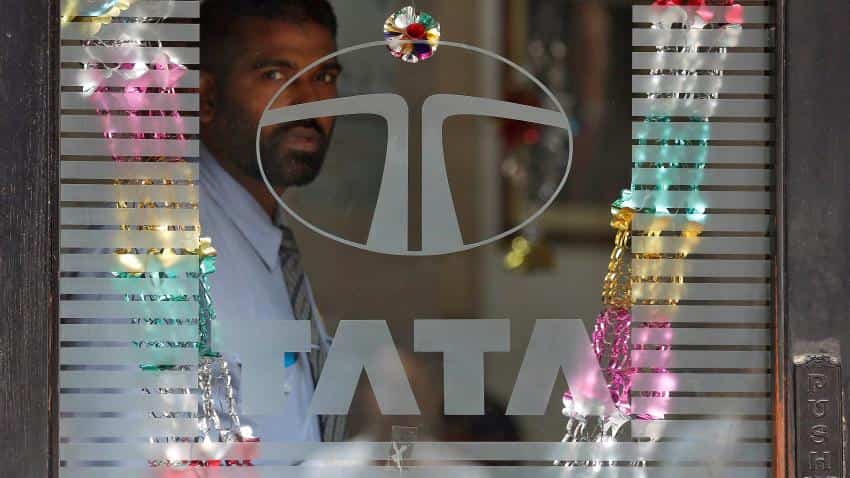 The Tata Group ousted its chairman, Cyrus Mistry, in the summary proceedings of a board meeting on Monday. Image Source: Reuters
Written By: Hitisha Jain
RELATED NEWS

With the ongoing saga at the Bombay House, Tata Group companies have lost nearly Rs 55,000 crore of investors' money in the past week. Several mutual funds have exposure to Tata Group stocks, which means a rejig such as this at the top level of one of India's largest conglomerates, and a boardroom drama gone public, is likely to have an impact on your portfolio if it consists a Tata stock. Should you still hold or is it right time restructure your portfolio?

The Tata Group ousted its chairman, Cyrus Mistry, in the summary proceedings of a board meeting on Monday.

In a scathing five-page e-mail which has since leaked, Mistry levelled allegations at the Group and his mentor, Ratan Tata, relating the tale of how he was reduced to a "lame duck" chairman. His e-mail also brought out several Tata Group companies' dirty linen into the public, which is now being scrutinised by the stock exchange and may draw attention from the markets' regulator Securities Exchange of India (Sebi).

In the ongoing battle, a recent news report quoted Mistry saying that the Tata companies faced nearly $18 billion in write-downs over time because of at least five unprofitable businesses that he'd inherited -- a claim that the Tatas have refuted but investors are still not sure.

Amid calls for more communication with the stakeholders and the likely initiation of a mediation between Mistry and Tata, investors remain concerned.

Apart from the huge equity holdings, stocks of Tata Group companies are owned by the mutual fund industry. In the light of the current turmoil, is it advisable to hold or sell? Let's take a look. 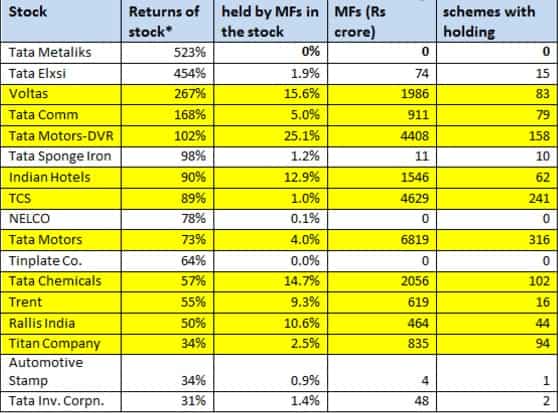 According to the chart, under Mistry's near-four-year regime, barring a few Tata stocks like Tata Power and Tata Steel that lost wealth for its investors, most of the companies yielded good returns for their investors, a Funds India report said.

In a report titled 'Will the Tata Group shake up impact your funds', Vidya Bala, Head, Mutual Fund Research at the firm, said that the stocks of Tata Coffee or Tata Steel saw a commodity upturn, which the mutual funds were quick to spot, and increase stake at lower levels. The returns from these stocks, over the last one year, were also healthy.

Stocks like Tata Chemicals, Tata Power, or Indian Hotels and Tata Steel, were rewarded by the markets for streamlining their businesses or selling their non-core businesses. "The markets rewarded them for cleaning up and getting leaner," she said in the report.

Then there are other stocks like Voltas, which are turnaround stories. "Much of these returns were driven by better fundamentals or perception of improving fundamentals", the report said.

Mutual fund holding in the Group companies is not high except for in a couple of stocks. This means that dispersion of
the exposure may have limited the impact of the fall on the stock markets. Tata companies' stocks remained in the red from Tuesday till late trading session on Thursday before executives stepped in to allay investors' fears.

The report said, "the exposure in the Tata Stocks is so widely dispersed across many schemes that the impact of the recent fall has not been significant in individual schemes thus far." 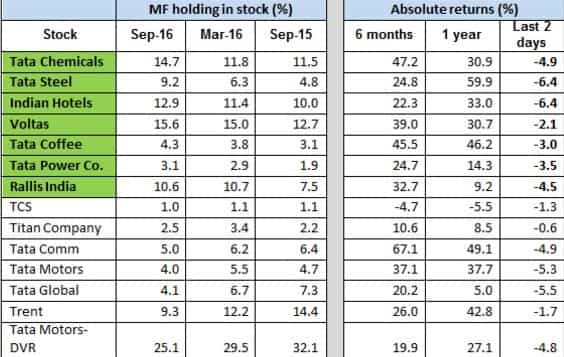 Bala said there's no need to panic as a mutual fund manager would gauge the impact of the fallout in Bombay House and "take a call whether to buy into dips in certain stocks, based on the fall as well as analysing the impact of the allegations" made in Mistry's letter.

All the individual Tata companies have their own boards and and full-time directors, so the exit of the chairman wouldn't serve to impact the day-to-day proceedings of a company, she said.