The Income Tax Department on December 15th announced that it's mandatory for PAN, Aadhaar card linking by 31st December 2019. 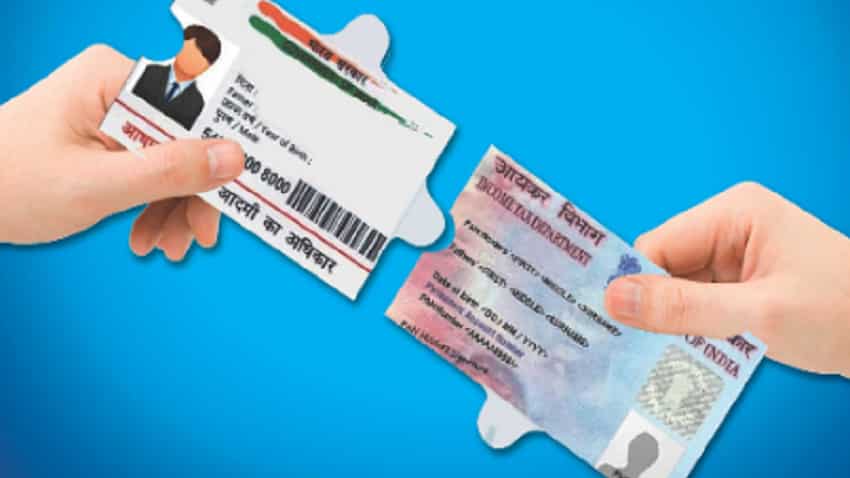 PAN, Aadhaar linking can be done through an SMS by sending a message in the format UIDPAN<SPACE><12 digit Aadhaar><SPACE><10 digit PAN> on 567678 or 56161. Photo: Courtesy Income Tax Dept. Portal
Written By: ZeeBiz WebTeam
RELATED NEWS

PAN Aadhaar Linking: The Income Tax Department on December 15 announced that it is mandatory to link PAN card with Aadhaar card by December 31, 2019 — the deadline it had announced earlier after by extending it from September 30, 2019. "Building a better tomorrow! To reap seamless benefits of income tax services, complete the vital link before 31st December, 2019," the Income Tax Department said in that announcement made on 15th December 2019. After this announcement by the Income Tax Department, if someone fails to meet PAN-Aadhaar linking deadline, their income tax return or ITR will get rejected and their PAN card will become inoperative. There are some more losses that a person may have to face, in case, he or she fails to meet the PAN-Aadhaar linking deadline.

As per the new Income Tax norms, from 1st April 2019, it has become mandatory to link and quote one's Aadhaar number during the ITR filing, which means an earning individual won't be able to file ITR without PAN-Aadhar linking. After 31st December 2019, if an earning individual files ITR without one's PAN Aadhaar linking, it's ITR will be rejected by the Income Tax Department. Those who are not in the income tax liability slab, should not feel relaxed as they don't file ITR and hence they need not do the PAN-Aadhaar linking. They also need to meet the PAN-Aadhaar linking deadline otherwise their PAN card will become inoperative. So, rather than facing these problems, it's better for the PAN and Aadhaar card holders to meet the Income Tax Department's given deadline.

How to link PAN-Aadhaar: Step by step guide

PAN-Aadhar linking is very simple. Those, who are already filing ITR and have mentioned their Aadhaar number while filing ITR previously, then there are chances of their PAN Aadhaar being already linked. The Income Tax Department has already done that on their own. To check whether one's PAN Aadhar linking already done or not one can check the PAN Aadhaar link online by logging at incometaxindiaefiling.gov.in — the official website of the income tax department.

If your PAN, Aadhaar is not linked then you need not worry. There is 'Link Aadhaar'option where you need to click at. After clicking at the 'Link Aadhaar' option, you will be redirected to a new page where you need to fill all information like your PAN Card number, Aadhaar number and your name. In the case of a change in name between Aadhaar and PAN, one has to fill the name whichever is correct.

If you are unable to link your PAN with Aadhaar by logging in at the income tax website, you can do this through a simple SMS as well. You just need to send SMS on 567678 or 56161. Format of the SMS is UIDPAN<SPACE><12 digit Aadhaar><SPACE><10 digit PAN>. There is no charge being levied on the SMS sender by NSDL or UTI. They have to pay the SMS charges being levied by the mobile operator company.