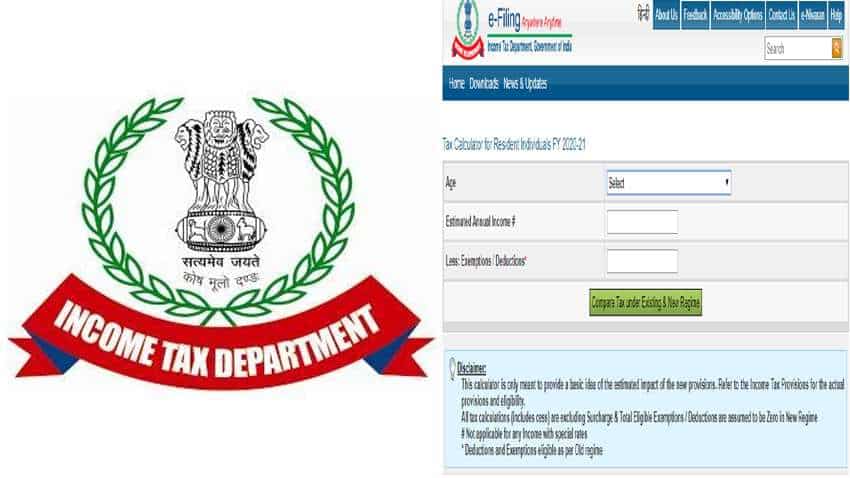 This will help an individual take an informed decision of opting either the tax slab while filing their income tax return (ITR) next year. Photos from Income Tax website and Twitter.
Written By: Prashant Singh
Edited By: Harish Dugh
RELATED NEWS

Right after the announcement of new income tax slabs and regime by Finance Minister Nirmala Sitharaman in her Budget 2020 speech, taxpayers have been curious about which one is better for them - New Income Tax Slabs Regime or Existing Income Tax Slabs Regime. To help taxpayers make the right decision, the Income Tax Department launched an e-calculator for individuals to estimate and compare their tax liability under the new tax slabs as compared to the existing regime.

The calculator has been updated by the department to make it more user friendly. It largely gives the user three broad results based on the kind of individual financial data fed into it. It will either tell the user about the tax benefit as per the new regime (as proposed in the budget), tax benefit as per the existing or old system and lastly if tax outflow for the user is same in both old and new regime. This will help an individual take an informed decision of opting either the tax slab while filing their income tax return (ITR) next year.

DISCLAIMER: This calculator is only meant to provide a basic idea of the estimated impact of the new provisions. Refer to the Income Tax Provisions for the actual provisions and eligibility.

# Not applicable for any Income with special rates

* Deductions and Exemptions eligible as per Old regime

Taxpayers in three age categories of normal citizen (below 60 years), senior citizen (60-79 years) and super senior citizen (above 79 years) can punch in their estimated annual income, total eligible deductions and exemptions to see what will be their total taxable income if they continue in the old regime or opt for the new one which will not allow any deductions and exemptions.

The calculator, once fed with data, promptly informs the user about the actual amount of money that can be saved by opting either of the two regimes.

A tab for the calculator has been placed on the homepage of the official e-filing website of the department -- https://www.Incometaxindiaefiling.Gov.In -- and upon clicking it takes the user to the next page meant for calculating tax liability for resident individuals (financial year 2020-21).

The old or the existing income tax rate regime allows a standard deduction of Rs 50,000 and investment of Rs 1.5 lakh in saving schemes with a rate of 5 per cent, 10 per cent or 30 per cent tax depending on various income levels.