If your vehicle has been damaged in a flood and you are wondering about the extent of coverage and the claim procedure, read on: 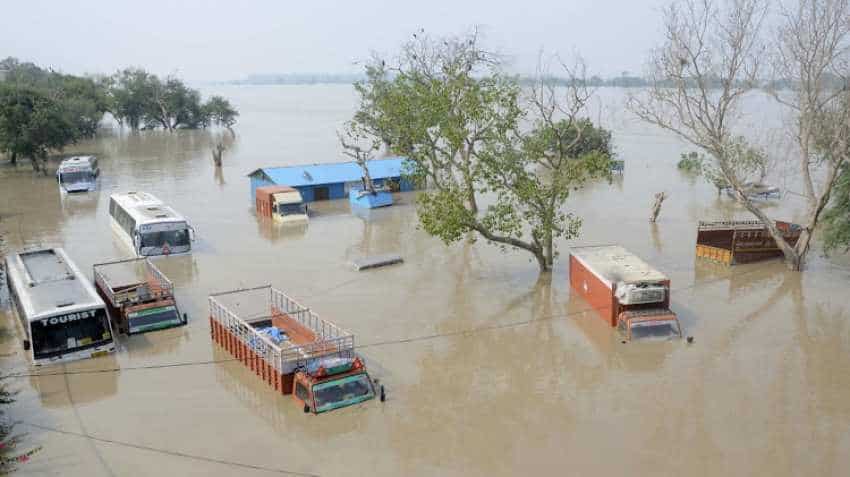 Damage to vehicles by floods is covered under a comprehensive motor insurance policy and the insurer is bound to pay it. Image source: Reuters
Written By: Devendra Rane
RELATED NEWS

After floods ravaged Chennai two years back, there were reports about how insurance companies reported losses in their motor portfolios. This is because damage to vehicles by floods is covered under a comprehensive motor insurance policy and the insurer is bound to pay it. Same could be the case now following the floods in Kerala, Karnataka and other parts of the country.

If your vehicle has been damaged in a flood and you are wondering about the extent of coverage and the claim procedure, read on:

A comprehensive motor insurance plan is the only way one can get complete financial protection for his vehicle. This plan offers coverage for any loss or damage done to the vehicle due to natural calamities and other activities like:

If one's vehicle gets washed away due to the floods, one can file a claim under their comprehensive motor insurance. It also covers damage to the vehicle's body mostly due to a tree falling on it or to the car due to heavy floods, or to the windshield of the car due to some other object striking it.

Apart from the general exclusions mentioned in the policy document, one must also be aware of the instances under which a comprehensive car insurance claim can be rejected:

Consequential loss or damage which is a result of insured's actions (whether intentional or by accident) and not an outcome of an event is not covered. The most common case being engine damage due to hydrostatic lock. Depreciation on plastic parts, tyre /rubber parts, etc, are not covered in a regular comprehensive policy. But they will be covered if the policyholder has purchased a zero-depreciation add-on. Damage to electrical accessories in the vehicle will not be covered unless electrical accessories value has been added to the coverage while taking the policy.Damage to the engine from driving through a water-logged area, unless covered by an engine protector add-on.

Filing a claim with the insurer

The best way to overcome the financial loss faced due to a natural calamity on your vehicles is to file a timely claim on your policy. It can be easily done by following these simple steps:

Contact the insurer at the earliest possible through any of the established channels of communication, that is, phone, branch bits, email, etc.The insurer will inform you about the next step and relevant action to be taken by you.Take pictures of the damaged vehicle from all the angles and create a complete video of the sameThe insurer will arrange for a surveyor who will visit and access the damage that your vehicle has sustainedThe surveyor will most probably compile his report based on the physical evidence at the scene to access the lossThe insurer based on the surveyor's report will then communicate to you about the acceptance or rejection of the claim

One must never move the damaged vehicle for repairs without proper permission and authorisation from the insurance company. Such actions on part of the vehicle owner leads to claim rejection. There could be situations like the vehicle being washed away and becoming untraceable, these claims will be categorised as 'complete loss' and full sum insured would become claimable. The insurer will access such cases separately and process them according to the circumstantial evidence available for the same.

Time limit for filing the claim:

It is important that the claims are filed at the earliest possible and not at the leisure of the owner. The insurer in case of a natural calamity may provide some relief or extend the deadline. This extension may be over the normal timelines by which claims would be acceptable. The insurer on humanitarian grounds may also do away with the documents or provide relief in some other form.

If your policy documents are not traceble the insurer may process the claim basis your car number. In fact, in light of the floods in Kerala and Karnataka, the regulator had issued guidelines directing insurance companies to ensure that all claims are surveyed immediately and claim payments are disbursed early.

The author is the founder & CTO, Coverfox.com