Income Tax Slab 2020: FM Nirmala Sitharaman has proposed the status quo on personal income up to Rs 5 lakh per annum while she has proposed a new income tax slab. 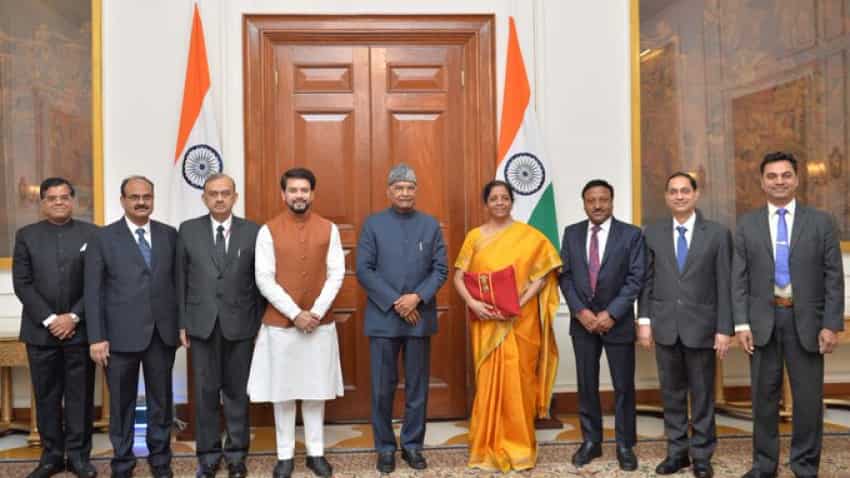 Income Tax Slab 2020: There are some key developments and focus made by the Govt of India towards the personal tax regime including DTT abolished to attract investors. Photo: President of India twitter handle

Income Tax Slab 2020: Paying heed to the common man's aspirations, Finance Minister Nirmala Sitharaman decided to target two birds with a single stone. She announced new income tax slabs while the status quo has been maintained on income up to Rs 5 lakh - no tax to be paid by those earning up to this amount. Importantly, Zee Business Managing Editor Anil Singhvi had raised a big demand for the reduction of income tax to give relief to individuals and put money in their pockets and thereby power the economy. As expected by the experts, this tax relief would help FM to increase the purchasing power capacity of the common public leading to a rise in liquidity in the market.

Here is the new income tax list of proposed rates to be imposed on an earning individual in budget 2020:

- A taxpayer earning above Rs 15 lakh per annum will have to pay 30 per cent of one's income.

Commenting upon the new income tax slab announcements Alok Agrawal, Partner, Deloitte India said, “There are some key developments and focus made by the Govt of India towards the personal tax regime including DTT abolished to attract investors and provides relief Dividend taxable only in hands of recipient at applicable rates Additional Interest deduction of 1.5 lacs for housing loans for affordable housing extended up to 31st March 2021.”