It is of utmost importance that you know what your income tax rate is and how much you will have to pay post Budget 2019. 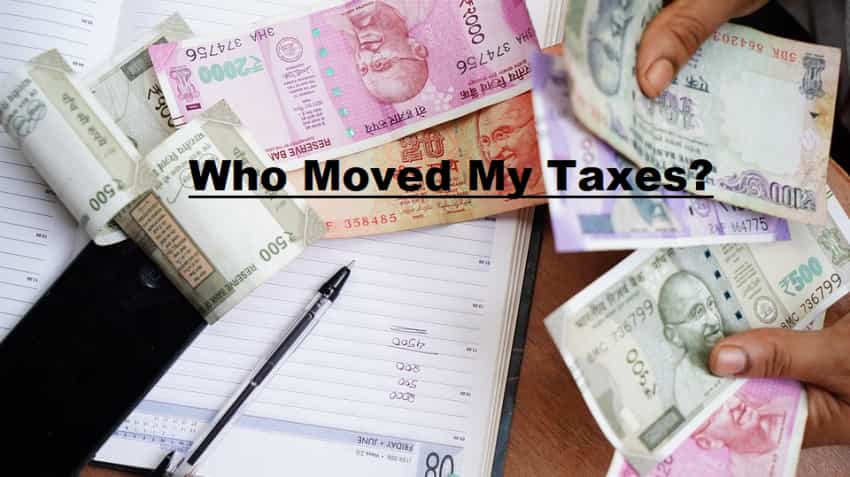 Piyush Goyal proposed that those who have a Rs 5 lakh income, will not have to pay tax. Photo: Pixabay

The moment interim Finance Minister Piyush Goyal announced a host of tax reliefs during Budget 2019 speech, there was an eruption of joy among taxpayers. In the midsts of big announcements about benefits to farmers, pension schemes, bank deposits, house rent, what stole the limelight was the announcement about employees tax rates. Goyal proposed that those who have a Rs 5 lakh income, will not have to pay tax. Standard deduction limit too was raised up to Rs 50,000 from previous Rs 40,000. However, the joy was short lived after confusion was cleared. As it stands, Rs 5 lakh income has been brought under section 87A, which will be discussed in detail below.

Goyal said, “Individual having taxable annual income up to Rs 5 lakh will get full tax rebate and therefore, will not be required to pay any income tax.”

Then the FM opened a another window for pensioners and middle class by making their income up to Rs 6.5 lakh, tax free as well. However, such benefits can be availed only after a taxpayer earning up to Rs 6.5 lakh makes an investment in government schemes like  provident funds, specified savings, insurance etc.

Archit Gupta, Founder & CEO ClearTax said, "The Rs 5L tax rebate under section 87A may be challenging to implement.Most taxpayers can claim this rebate while filing their tax return, since only at the time of filing their tax return, they will know exactly how much total income they have earned and the section 80 deductions they are actually claiming to become eligible for this rebate.”

While Rs 6.5 lakh news still awaits a proper guidelines from the NDA government. However, hate to break it to you, but the Rs 10.35 lakh tax relief story is not true. This was reported after experts opined that zero tax was possible on an amount of Rs 10.35 lakh. In fact, CBDT chairman Sushil Chandra himself clarified that the old income tax slab would continue for higher annual incomes above Rs 5 lakh.

However, by then it had sowed chaos and confusion among citizens. Therefore, it is of utmost importance that you know what your tax rate is and how much taxes you will pay post Budget 2019. But first, you must understand the structure of your pay slips and CTC - as they play a major role in your taxes paid to Income Tax Department. Here’s a guide for your income tax on salary with ClearTax inputs.

Basic Salary - This is a very important portion for you! It is a fixed component in your paycheck and a deciding factor for how much HRA, PF will be deducted. For example - if HRA is set at 12%, then it will be deducted from your basic salary. Majority of the company on a financial year beginning, releases the copy of how much is your basic salary and what you will take home. Take a note, basic salary is not your current CTC.

HRA - The sole purpose of an employer to give your HRA, is because if you stay in a rented house or apartment, then you can claim the amount of this allowance to lower your tax. HRA depending upon your basic salary and rent, is either partially or completely tax exempted.

LTA - This benefit is given under basic salary to employees who plan to take a trip within India with parents, children or spouse. The amount you use for your vacation, can be claimed. However, the tax exemption is for shorter distance trip. Also, you will not be allowed to claim any LTA, until you actually take travel.

Bonus - This one is paid once or twice in year, depending upon the company's terms and conditions. Mostly, firms give you bonus on fiscal year end March of every year. But whatever may be either incentives or bonus - they are 100% taxable. Bonus is given on your performance depending upon your appraisal ratings.

Standard Deduction - A standard deduction is a fixed amount which can be deducted by a salaried employees from their gross salary. Now, they will deduct Rs 50,000 and not Rs 40,000. Every employees is liable to pay taxes on their income, and hence such deduction reduces the amount a taxpayer pays to IT department.

Professional Tax - This one is imposed by a state, just like the taxes levied by central government. Maximum amount can be Rs 2,500 which is given as professional tax to states. It is usually deducted by the employer and given to state government.

The money you take home!

In a working class environment, there are host of benefits like coupons, cab service, etc. which we are entitled for and is not included in our salary. Hence, the total cost to the company is the sum of all benefits you enjoy plus your salary. 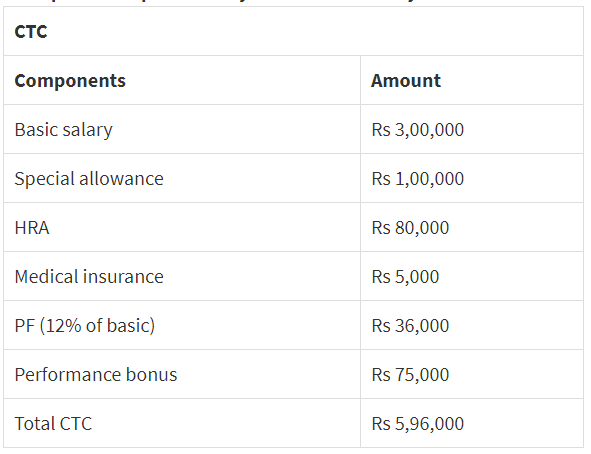 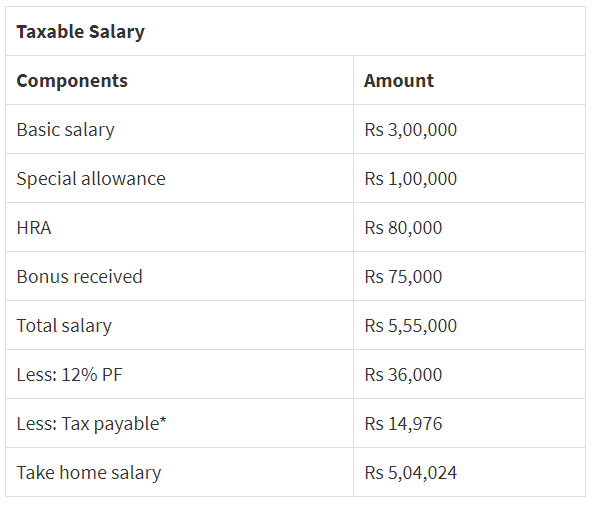 Considering its an interim Budget, the real one will be implemented after outcome in Lok Sabha elections. Thereby, your income tax rate remains same. Also, the Rs 5 lakh tax rebate, does not changes the tax exemption limit which is Rs 2.5 lakh still even after Budget 2019, and the rates after the limit as also same. The only difference is Rs 5 lakh tax rebate under section 87A.

Gupta said, “Those with income exceeding Rs 5L will pay tax on income between Rs 2.5L-5L @ 5% as before. Taxpayers with total income not in excess of Rs 5L will be offered rebate of zero tax via section 87A.”

For instance - Rajesh’s total income is Rs 8 lakh for FY 2018-19. Here’s how taxes will be levied as per new development. 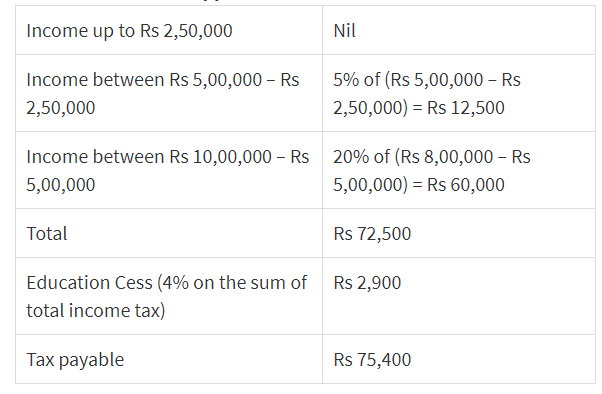 This form is a certificate of Tax Deducted at Source (TDS) by your employer every year. The IT Department makes it obligatory for employers to deduct a certain portion from your salary in the form of TDS and this money is deposited with government. Your employer generally updates you with a form 16 every year during the month of June or July, explaining the tax deducted from your salary. The form includes information like salary you have earned during the year and the TDS amount deducted.

Hence, do not let confusion take place in your taxes. The IT-department has made it very easy and clear for citizens. Hence, make sure you are aware of your payslips and the pattern of taxes. It’s always wise to be an alert citizen, then a grumpy one on taxes!