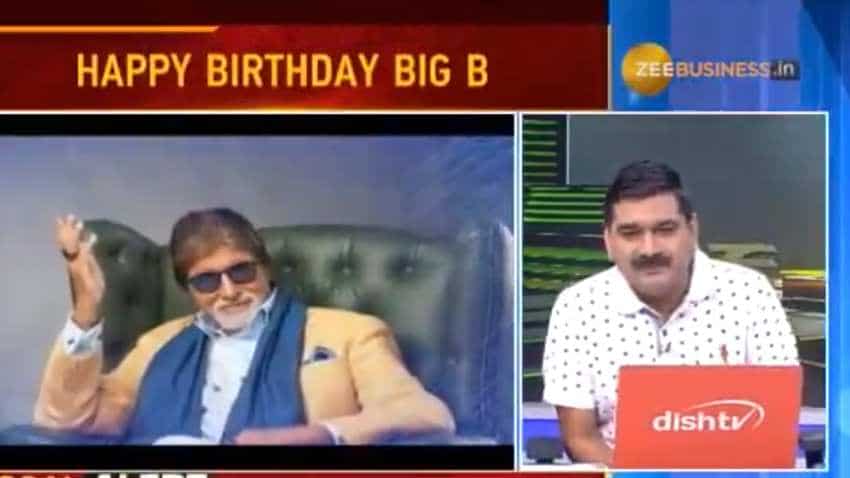 "Aye, khush toh bhahut honge tum aaj" - A dialogue from Amitabh Bachchan's iconic film Deewar that has lived beyond generations and is popularly used even now. Want to know how, and when, Zee Business' Managing Editor Anil Singhvi puts it to use? No points for guessing right - every time the market goes green! As the 'Angry Young Man' of Bollywood turns 77 on Friday, Anil Singhvi revealed that Bachchan is his all-time favourite actor and for reasons that go beyond films. Speaking on Zee Business TV, Singhvi said that, while everyone knows Amitabh Bachchan's acting skills, it is his ability to effect comebacks that make him special.

"Everybody knows that he is a great actor and has given so many hits over the years. But, my liking for him comes from two other reasons. First is 'comebacks'. He was badly injured during the shooting of the film Coolie. And, the way he came back from that injury and started a second innings is an example for all of us," Singhvi said, while adding that it shows that we can rise above any difficulty in life whether it is mental or physical.

For those unaware about the incident, the actor got badly injured while filming a fight sequence for Coolie with co-star Puneet Issar at the Bangalore University campus on July 26, 1982. He had reportedly received 60 bottles of blood from 200 donors. Notably, one of those donors were carrying Hepatitis B virus. Even though Bachchan recovered from the injury, it was discovered in 2000 that the virus had resulted in cirrhosis of the liver, which damaged about 75% of his liver!

The other reason why Anil Singhvi likes Amitabh Bachchan is because of the way he came out of a financial crisis in the late 90s. "The second reason is that when he started ABCL, he almost went bankrupt. There was a time when he was almost about to sell his house even. He recovered even from that situation. He is probably the biggest comeback superstar, both in life and business," Singhvi said.

Started in 1996, Amitabh Bachchan Corporation, Ltd. (ABCL) was declared a failed company by the Indian Industries board and the actor then returned to acting.

Singhvi said that Amitbah Bachchan's passion for work also inspires a lot of people. "He is the only actor from his generation who is still active in the film industry. In fact, he is one of the busiest actors even at this age. He inspires with his passion for work," Zee Business' Managing Editor said.

The actor was last seen in Chiranjeevi starrer Sye Raa Narasimha Reddy and is currently shooting for Brahmastra, Chehre and Gulabo Sitabo.