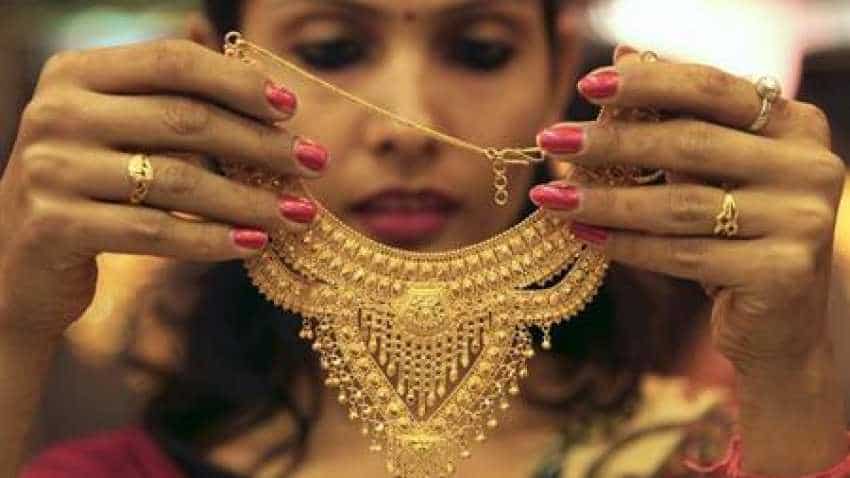 The gold prices have never been better since 2016. Photo: Reuters
Written By: Pooja Jaiswar
Edited By: Rajeev Kumar
RELATED NEWS

While a month ago, global scenarios were influencing gold price across India, a new factor has come into play this month. It is gold custom duty. Indian gold prices have already peaked to all-time high above Rs 35,000 across regions led by geopolitical tensions, dollar weakening and major central banks pinning down major rate cut hopes. The gold prices have never been better since 2016. While one hoped the gold price upswing to materialize by the next couple of months. Various factors including new ones are now pushing gold price above. However, a question still remains as to how far this yellow metal can go.

Last week, gold prices inched up by Rs 930 to Rs 35,800 per 10 gram, just a couple of rupees away from touching a new all-time high of Rs 36,000-mark. It was seen as a positive trend overseas because make no mistake, gold is considered to be one of the best instruments for hedging funds. The rise in gold price this time was led by US Federal Reserve Chairman Jerome Powell who made it even more clear about possible rate cuts soon, prompting investors to park their money in safe haven assets.

Following the news, gold prices have touched 1-week high. Spot gold grew by 0.3 per cent to 1,422.67 per ounce in intraday trade, which was the highest since the metal cracked $1,426-mark on July 03. Also, the yellow metal has surged by 1.5%  in the previous trading session. Meanwhile, the US gold futures swung up to 1,424.70 per ounce.

Earlier, CARE Rating in its research note said, “Gold did not see a particularly good rally in 2018. During 2018 the price had tended to also decline which was assumed to be the new normal for the metal. In fact, the price had breached the psychological mark of $1,200 per ounce mark in August. This was attributed to the growing strength of the dollar as the two variables are inversely related. A stronger dollar means that the price of gold in other currencies becomes dearer thus impacting demand. However, things have changed of late with the price crossing the $1400 mark and promises to head upwards given the underlying conditions.”

While it was already expected that rate cuts from US front would mean more buyings in gold, but in India even custom duty will play a major role in impacting the valuation of this yellow metal.

In her Budget 2019 speech, Finance Minister Nirmala Sitharaman proposed to hike gold custom duty to 12.5% from previous 10%. Surprisingly, this was the opposite of what gold sector had expected. Many even were deeply hoping for custom duty cut to 5%. But sadly, custom duty hike will play a major role in Indian gold price ahead.

Kotak Securities in its research note said, “In Indirect Taxes, the FM has hardly built in 3% rise in Central GST collection. Due to rise in import duties on series of items, including gold the Customs Duty collection is expected to rise by 20% in FY20BE.” Following which, the note further added saying, “ Increase in duty may encourage smuggling. Further, increase in gold price could impact demand in the short term.”

While IIFL Securities expert in their research note said, “Custom duty on gold and silver increased, from 10% to 12.5%. This would push up domestic prices and may marginally weigh on volumes. Note that Titan typically charges making as a % of realisation and, hence, the impact is restricted to volume moderation, if any.”

Reliance Securities analysis says the government proposed to increase custom duty on gold and other precious metals from 10% to 12.5% as against the industry expectations of reduction in custom duty. Historically, Indian companies have successfully passed on the price hikes due to additional taxes in past. However, considering the current gold price which leads to Rs875-900 hike per 10gram is likely to impact demand scenario in the medium term.

Hence, one can brace for further uptick in gold prices. Right now is not the time for buying, but one can always make profit booking in yellow metal.