e-Shram portal has been launched as a national database for unorganised workers to ensure their overall welfare. 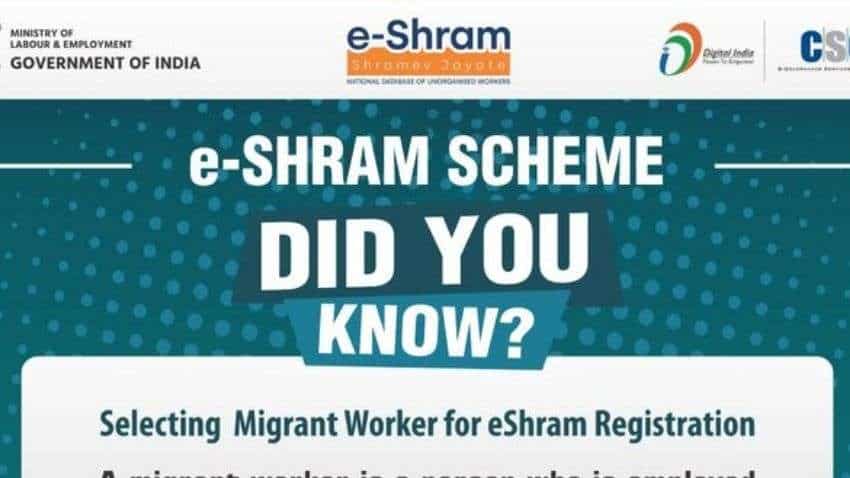 e-Shram portal has been launched by the central government as a national database for unorganised workers to ensure their overall welfare. The portal will be seeded with the Aadhaar cards and more than 38 crore unorganised workers (UW) in the country will be registered under one portal.

If you want to register on the portal then you must be aware of the terms and words used in the portal while registering.

As per the information provided by official twitter handle of Common Services Centres, a government of India entity working under Ministry of Electronics and Information Technology if you are selecting migrant worker for e-Shram registration then you need to know that a migrant worker is a person who is employed in an establishment or has come on his own to another state and draws wages not exceeding Rs 18,000 per month.

"DID YOU KNOW? Selecting Migrant Worker for eShram Registration... A migrant worker is a person who is employed in an establishment or has come on his own to another state and draws wages not exceeding Rs. 18,000 per month," CSCeGov tweeted.

A migrant worker is a person who is employed in an establishment or has come on his own to another state and draws wages not exceeding Rs. 18,000 per month.#DigitalIndia #eShram #RuralEmpowerment #CSC pic.twitter.com/APMaxGHtiO

Here are some other terms which you can know:

1. Unorganised Sector: An enterprise owned by individuals or self-employed workers and engaged in the production or sale of goods or providing service of any kind whatsoever, and where the enterprise employs workers, the number of such workers is less than ten.

3. Building Workers: A person who is employed to do any skilled, semi-skilled or unskilled, manual, technical or clerical work for hire or reward, whether the terms of such employment are express or implied, in connection with any building or other construction work, but does not include any such person who is employed mainly in a managerial or supervisory or administrative capacity.

4. Contract Labour: A worker who shall be deemed to be employed in or in connection with the work of an establishment when he is hired in or in connection with such work by or through a contractor, with or without the knowledge of the principal employer and includes inter-State migrant worker but does not include an employee (other than part time employee) who is regularly employed by the contractor for any activity of his establishment and his employment is governed by mutually accepted standards of the conditions of employment (including engagement on permanent basis), and gets periodical increment in the pay, social security coverage and other welfare benefits in accordance with the law for the time being in force in such employment.

5. Employee: Any person (other than an apprentice engaged under the Apprentices Act, 1961) employed on wages by an establishment, either directly or through a contractor, to do any skilled, semi-skilled or unskilled, manual, operational, supervisory managerial, administrative, technical, clerical or any other work, whether the terms of employment be express or implied, and also includes a person declared to be an employee by the appropriate Government, but does not include any member of the Armed Forces of the Union.

6. Employer: A person or an association of persons, who has engaged or employed an unorganised worker either directly or otherwise for remuneration.

7. Home Based Worker: A person engaged in the production of goods or services for an employer in his or her home or other premises of his or her choice other than the workplace of the employer, for remuneration, irrespective of whether or not the employer provides the equipment, materials or other inputs.

10. Wage Worker: A person employed for remuneration in the unorganised sector, directly by an employer or through any contractor, irrespective of place of work, whether exclusively for one employer or for one or more employers, whether in cash or in kind, whether as a home-based worker, or as a temporary or casual worker, or as a migrant worker, or workers employed by households including domestic workers, with a monthly wage of an amount as may be notified by the Central Government and State Government, as the case may be.

e-Shram Registration: Workers can update these details on e-Shram portal; know the process

e-Shram Registration: Are farmers eligible to register on the portal? Know details here

e-Shram: How many people can register with one mobile number? Know process, other details here