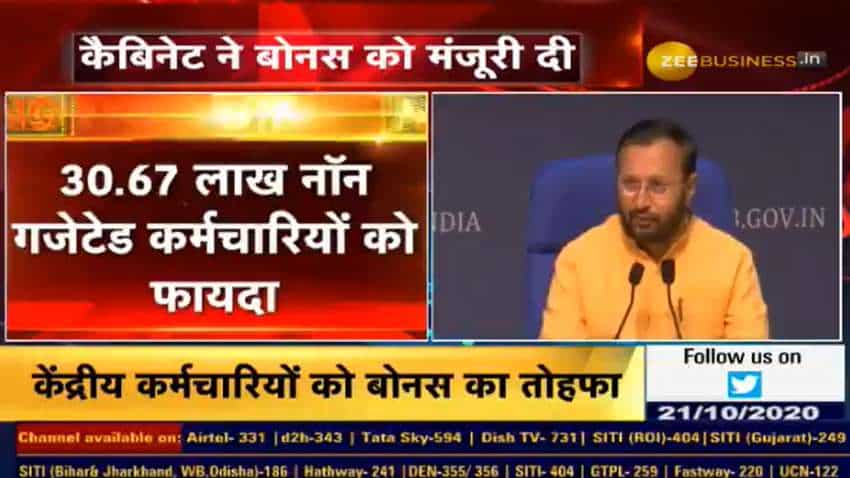 A total of 30.67 lakh employees would be benefited by the Bonus announcement and total financial implication will be Rs 3,737 crore.
Written By: Prashant Singh
Edited By: Harish Dugh
RELATED NEWS

Moreover, Non-PLB or ad-hoc Bonus is given to Non-Gazetted Central Government employees. 13.70 lakh employees would be benefited and Rs.946 crore will be the financial implication for the same.

A total of 30.67 lakh employees would be benefited by the Bonus announcement and total financial implication will be Rs 3,737 crore.

Payment of Bonus to non-gazetted employees for their performance in the preceding year is usually made before Durga Puja/Dussehra season.

A Cabinet statement released after the meet said, "The Government is announcing the Productivity Linked Bonus (PLB) and ad hoc bonus for its non-gazetted employees to be disbursed immediately.

Earlier, on Oct 12, in a bid to stimulate demand in the economy, the Modi government had announced giving out cash vouchers to central government employees this year in lieu of leave travel concession (LTC) fare which could be spent only on buying non-food GST-rated items.

Finance Minister Nirmala Sitharaman said the employees could buy items that attract 12 per cent or more goods and services tax (GST). These purchases will have to be made in digital mode from GST-registered outlets. Since travel is difficult to undertake during the pandemic, the government will pay the entitled fare as cash vouchers which have to be spent by March 31, 2021, she had said.

Every four years, central government employees get LTC to any destination to their choice plus one to their hometown.