IDS was announced by the government with an aim to flush out black money from the domestic economy. 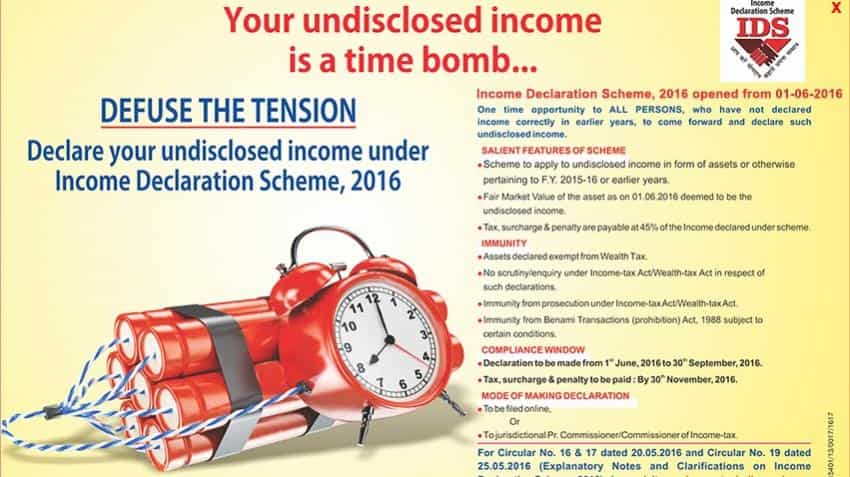 The four-month IDS got operational on June 1 and will be in force till September 30. Photo: Official Website
Written By: PTI
RELATED NEWS

The Income Tax department has created a special zone on its official website to showcase country-wide activities being done by it to popularise the one-time black money compliance window that will complete its first month in operation soon.

A 'dashboard' has been hosted on the official web portal of the department --http://www.incometaxindia.gov.in-- and it chronicles all activities initiated by the department, the Central Board of Direct Taxes and the Finance Ministry to make the Income Declaration Scheme (IDS) successful.

The four-month IDS got operational on June 1 and will be in force till September 30. The declarant will have to pay a total of 45 per cent in tax and penalty by November this year and the government has ensured that such entities will have immunity from prosecution.

Under the new tab on the website, the department has also put messages and speeches made by Prime Minister Narendra Modi, Finance Minister Arun Jaitley and other senior officials in connection with the IDS, even as it goes on to chronicle news stories and tally of sessions being held by taxmen across the country to popularise the scheme.

IDS was announced by the government with an aim to flush out black money from the domestic economy.

The IDS will apply to undisclosed income whether in the form of investment in assets or otherwise, pertaining to financial year 2015-16 or earlier.

Declarations under IDS can either be made online on the official e-filing website of the tax department or before various regional Principal Commissioners of I-T department.

Corona fact-check: Holding breath for a minute is no test for coronavirus