If gold prices continue to shine, possibility is high demand could slow down especially in festive season. 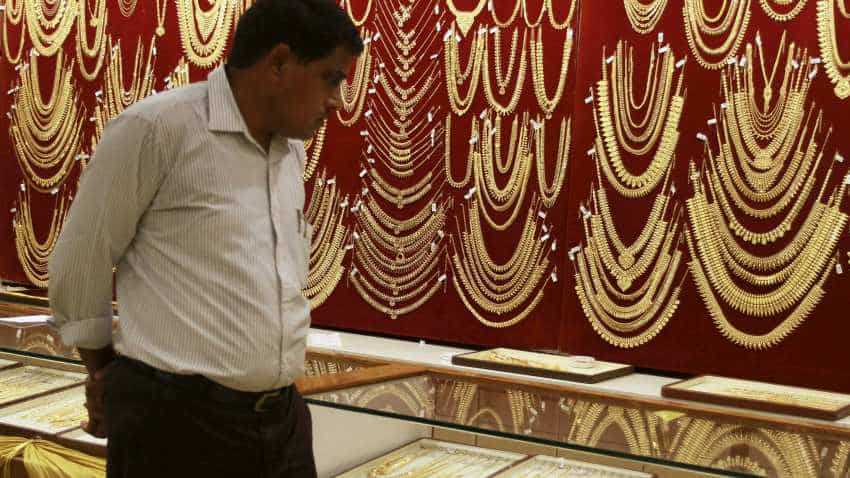 Gold prices across India have continued to rise over Rs 35,000 in some states including metro cities as well. Photo: Reuters

Gold prices across India have continued to rise over Rs 35,000 in some states including metro cities as well. With rates at all-time highs, this has dampened the demand for this yellow metal. Considering that last year's performance was subdued, this new rally is being hailed. However, where exactly are gold prices headed, and at what levels can this yellow metal earmark going forward, is what is on buyers and sellers minds. Why? Because, if gold prices continue to shine, chances are demand could slow down  especially in the festive season.

On Wednesday, the head of an industry body told Reuters that, gold demand could drop by 10% in 2019,  from a year ago to the lowest level in three years as a rally in local price to a record high dents retail purchase in key festive season. Also, the All India Gem and Jewellery Domestic Council (GJC) Chairman Anantha Padmanabhan stated that, customers are not used to such a pump in prices.

Economists at Care Rating in their research note said, “Gold’s rally now appears to be in progress as large volumes of currency across the world is being channeled to the exchange-traded funds. This has been furthered by a more volatile political situation where investors are rushing to gold as a safe harbor.”

Geopolitical tension this year are manifold. Firstly, US and China are in a tug-of-war over trade tariffs. Both the parties seem not to blink, and hence investors are concerned as solution seems not anytime soon. The US has imposed tariffs on Chinese items worth $250 billion, furthermore are expected to be levied soon. CARE Ratings note says, “Trade wars tend to slow down global growth and enhance uncertainty.”

Further there has already been political and economic tension between US and Middle East. Long-standing nuclear issue with Iran has already resulted in sanctions being imposed by the USA. “The situation appears to be exacerbated of late on the political side which has increased tensions in this region,” the note added.

Then there is dovish tone practiced by major central banks like the US Federal Reserve and European Central Bank (ECB) with further rate cut hopes in their policy. The situation has indicated that dollar is seen to weaken, which will in contrast become an upside impetus for gold. Notably, 10-year treasury is already less than 2%. On this, CARE’s note says, “ Investors are taking long positions on the exchanges and there is also a rise in physical demand for the metal.”

“Possible slowing down of the global economy against what was projected earlier this year. The indications given by most central banks suggest that things are not that well and that a monetary stimulus is very much on the cards,” the note added.

Interestingly, the course of Brexit has already been hampering investor sentiments for quite a few years. Currently, the act of an exit is hovering between ‘the deal’ versus ‘no deal’ exit, which as per CARE has added to uncertainty in this region which in turn has made the global dynamics that much more unstable.

In the midst of all this, attention has shifted towards the G-20 summit scheduled this weekend. Expectations are over US and China having talks for possible solution over trade issues.

Following all the above, investors have been on wait-and-watch mode over equities market, while driving gold prices which is a safe haven to minimise risk over political uncertainties.

But wait a spoiler alert on what actually drives gold?

It would be US dollar index which plays a key role in gold price movement. If the Fed’s interest rates are lower, then it works in favor of gold and they gain or vice versa. A background check: Gold prices had actually declined post election in 2016, as the US President Donald Trump pointed that there would be expansionary policies that would in turn lead to inflation which would necessitate higher interest rates. In this case, gold becomes less attractive as dollar would gain strength against other currencies.

CARE’s note hence says, “The currency markets hence plays its role as a stronger dollar makes it more expensive to buy gold in other currencies and lowers demand. Last geo-political instability is also responsible for gold price movements as any level of uncertainty makes gold more alluring as a safe investment.”

As the present pressures do not seem to be ebbing, the market is not ruling out a further upward movement in the range of $ 1450 in the next few months which can be the next testing point. It is largely expected now that the Fed will lower rates in its next meeting and can be the next trigger for a spike in price, though the Fed Chief Mr Powell has reiterated that it cannot be taken to be a ‘given’, as per CARE’s note.

The rating agency’s note also highlighted that, there are another set of market participants who still view the present rally with caution and would like to see how the US-Iran and US-China relations evolve as this will have a bearing on the price of gold.

But for sure the slower growth in the USA and a weaker dollar with low interest rates would be the fundamentals to watch out for.