7th Pay Commission Salary Calculation: Ever since the implementation of the 7the Pay Commission recommendations, the central government employees have been demanding a hike in minimum basic pay and the fitment factor. 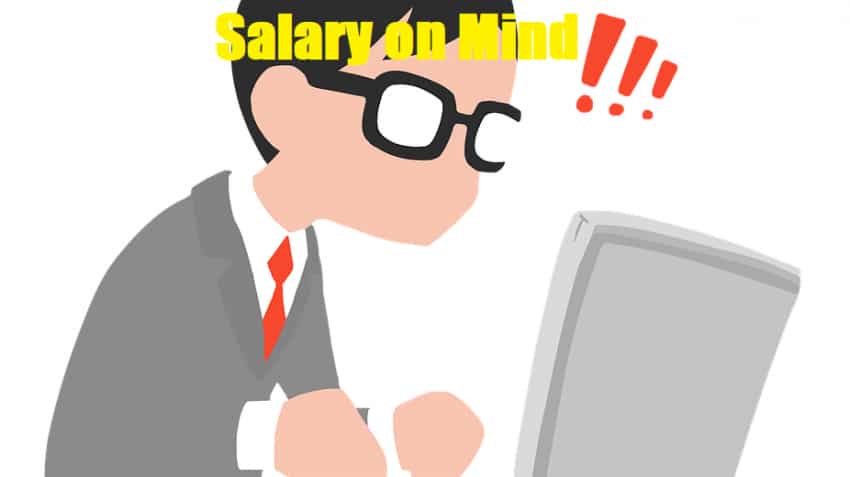 The 7th Pay Commission was of the view that the "ILC norms, along with other supplements (the entire set of seven components), are the best approach to estimating the minimum pay". Image: Pixabay
Written By: Rajeev Kumar
RELATED NEWS

Prior to the 7th Pay Commission, the fifth pay panel had adopted the "Constant Relative Income Approach" to estimate the minimum pay. Under this approach, it is believed that the real minimum pay of an employee must grow in tandem with the real per capita income. This would make the compensation of a government employee independent of the economic realities of the country. In other words, they won't be affected by price rise or fall.

As on 1-1-1996, the fifth pay commission had arrived at a 'price-protected' minimum pay of Rs 1860 per month. At the implementation stage, however, the minimum pay was raised to Rs 2550 per month.

The sixth pay commission had relied on the norms set by the 15th Indian Labor Conference (ILC) in 1957 to determine the need-based minimum wage for a single industrial worker. The need-based salary approach included cover for all the needs of a worker's family, considered to be including a spouse and two children below the age of 14. The needs included food, clothing, housing rent, fuel, lighting etc, as per the recommendations of noted nutritionist Dr Wallace Akroyd. The sixth pay panel also considered other components of expenditure such as cover for children’s education, medical treatment, recreation, festivals and ceremonies. The sixth pay commission had implemented a minimum pay of Rs 7000 per month on 1-1-2006.

The 7th Pay Commission was of the view that the "ILC norms, along with other supplements (the entire set of seven components), are the best approach to estimating the minimum pay". Arguing for this approach, the report said: "...as it is a need-based wage calculation that directly costs the requirements, normatively prescribed to ensure a healthy and a dignified standard of living."

Step 1. The food, clothing and detergent products listed and their respective quantities specified by the 15th ILC were adopted. These quantities indicate the monthly consumption of the listed products by a family comprising three consumption units [Husband (1)+Wife(0.8 unit)+two children (0.6) unit each = 3)].

Step 2: The quantities were multiplied by their respective product prices to arrive at product wise cost. The price adopted for each product is the average of prices of various items included in the product. The price of an item is the average of its prices prevailing in each month from July, 2014-June, 2015.

Step 3: The cost of food, clothing and detergent products obtained from Step 2 has been divided by 0.8 to arrive at a total, of which 20 percent provides for fuel and lighting expenses.

Step 4: The cost estimated from Step 3 is divided by 0.85 to arrive at a total, of which 15 percent is towards recreation, ceremonies and festivities. The prescribed provision of 25 percent to cover education, recreation, ceremonies, festivals and medical expenses were moderated to 15 percent because expenses on educational and medical necessities were separately provided for through relevant allowances and facilities

Step 5: The cost estimated from Step 4 is increased by 25 percent to account for the skill factor, following the reasoning that there was no unskilled staff in the government after the merger of Group D staff in Group `C’. 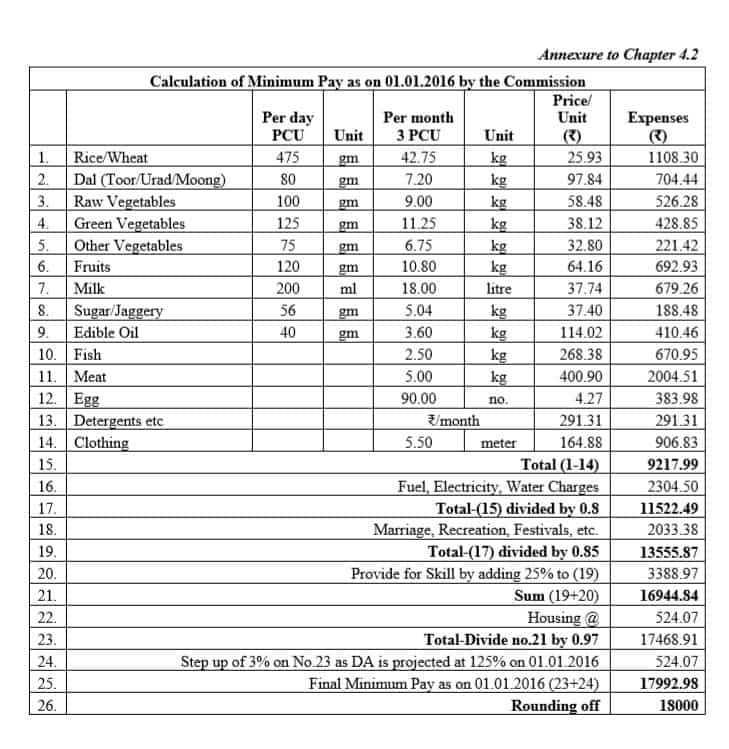 Step 6: The cost estimated from Step 5 was divided by 0.97 to arrive at a total, of which 3 percent provided for housing expenses. This was done in view of the observation that license fees for government accommodation was about 3 percent of the total pay.