"In simple language, 11 Virat Kohli's can't make a winning team," this is what financial expert Harsh Roongta told Zee Business TV as he tried to explain the importance of maintaining a diversified investment portfolio where your money is invested in the right kind of schemes. 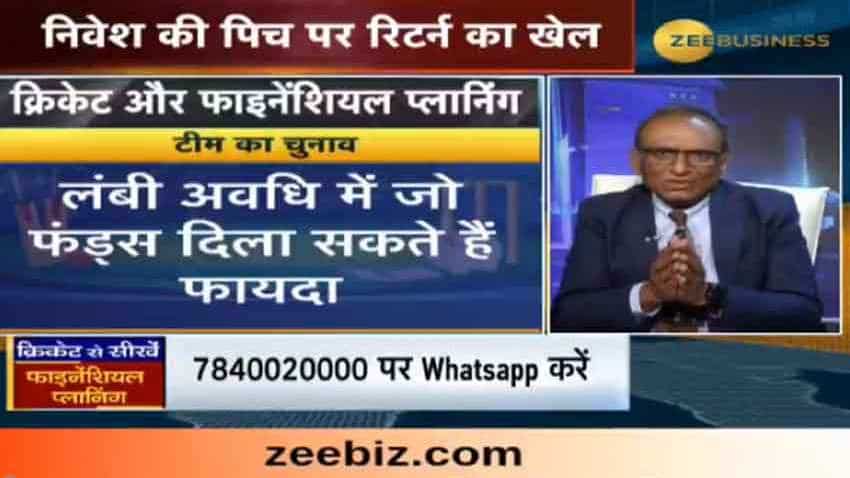 It might be the on-field drama that excites the spectators most, but what goes behind the closed doors is equally interesting and comes with a lot of lessons.

"In simple language, 11 Virat Kohli's can't make a winning team," this is what financial expert Harsh Roongta told Zee Business TV as he tried to explain the importance of maintaining a diversified investment portfolio where your money is invested in the right kind of schemes. "No matter how big a player he is, you need to find the right combination," Roongta added. Notably, most international sides have struggled to find the right balance in their final XI for the ICC ODI World Cup that started in London today with England, the hosts, facing off against South Africa.

Most teams start preparing for the next World Cup as soon one gets over and despite that, fail to find all pieces of the puzzle even after trying for four years. The Indian cricket team is less than a week away from playing its first game and the number position continues to haunt the team management, New Zealand suddenly finds itself without an opened after persisting with Colin Munro for more than two years now while Australia might have to leave out Shaun Marsh on the bench - its most successful ODI batsman over the last 12 months - with David Warner and Steve Smith returning after their one-year-long bans.

It might be the on-field drama that excites the spectators most, but what goes behind the closed doors is equally interesting and comes with a lot of lessons. Here are five money lessons you could learn from cricket as ICC ODI World Cup gets underway in England -

1. Strategise - Roongta explained that just like cricket you need to strategise when it comes to investments. He urged investors to treat investment like long-term sport. "If you want to win a game of cricket, you need a good strategy. Similarly, investment is a long-term game which requires a strategy," he said.

2. Identify - Most franchise leagues are about scouting the right domestic talent and blending it with experienced overseas stars. While investing, "You need to identify proper instruments, protect your investments and even take help from outside players," Roongta said.

3. Chose as per needs - Most teams have gone to the World Cup with an extra fast-bowling option as the conditions are likely to help seamers - a strategy you need to follow when it comes to investing. Roongta explained that you to invest as per your needs.

"For example, this year's World Cup is in England so the selectors have picked a side that would suit the conditions. They have probably opted for bowlers that can swing the ball and are accurate even though they don't have too much pace. They have picked batsmen that play in the 'V' even though there is strike rate is less than others. This is because the ball tends to swing more in England," he said.

4. Set your goal - Even before leaving for the World Cup, you know that the team's target is to win the tournament. "Similarly, before investing, you should know what your target is. Sometimes it is not important to score runs but to win the match. When it comes to investments, your instruments for 10-year horizon would be different from 5-year horizon," Roongta explained.

5. Select your XI right - In cricket, you take a team of 15 to the tournament but the final XI is selected on the basis of conditions and the opposition you are facing. "While investing too, you need to decide the instruments while measuring the risk factor, returns and time you want to stay invested in," he said.

How to choose between two schemes?

In cricket, selectors often face situations where they have to take a call between two similar players. In fact, even this year, the Indian selection committee opted to go for Vijay Shankar instead of Ambati Rayudu, given the former's 'three-dimensional abilities. You might face similar situations while choosing between two schemes.

"People always compare big players. For example, they might argue whether Virat Kohli or Cheteshwar Pujara is a better batsman. If there are two similar batsmen, you check who is better suited for English conditions and make the decision on the basis of that. Sometimes, the management makes a decision considering how many batsmen have to be picked in the playing XI. They would also want a couple of batsmen you can bowl too. The final XI is chosen keeping in mind all these factors," Roongta said.

"While investing, you need to chose your assets first i.e. how much you want to invest in equities or debt. Then, you need to decide the amount that will parked under large cap, mid cap or small cap category under equities. The idea here is to find the right balance to form a winning combination," he said.