LONDON (Reuters) - Tottenham Hotspur rode their luck in the quest for a top-four finish in the Premier League with a 1-0 victory at Fulham on Thursday thanks to an own-goal by Tosin Adarabioyo and the intervention of the Video Assistant Referee (VAR). 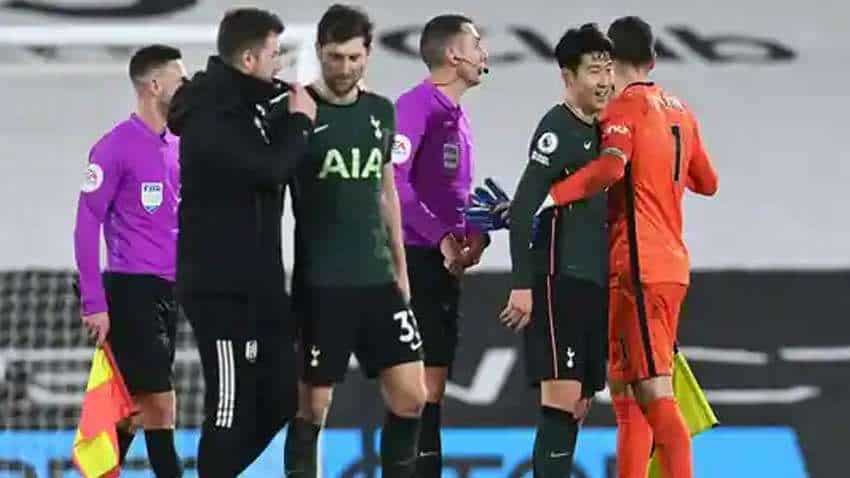 Tottenham edge past Fulham thanks to Adarabioyo own goal. Source: Reuters

LONDON (Reuters) - Tottenham Hotspur rode their luck in the quest for a top-four finish in the Premier League with a 1-0 victory at Fulham on Thursday thanks to an own-goal by Tosin Adarabioyo and the intervention of the Video Assistant Referee (VAR).

Victory dragged Tottenham back into the race for a Champions League spot with Jose Mourinho`s eighth-placed side on 42 points from 26 matches, four points behind Everton in fourth, ahead of Sunday`s clash with Crystal Palace.

Seconds after an unmarked Harry Kane failed to head his team in front, Tottenham took the lead from a quick counter-attack in the 19th minute when Son Heung-min`s cross was met by Dele Alli before going over the line following a touch by Adarabioyo.

Fulham began the second half brightly and thought they had equalised through Josh Maja but his effort was controversially chalked off by VAR after Davinson Sanchez kicked the ball onto Mario Lemina`s hand as Tottenham looked to clear.

Midfielder Alli looked sharp in his first league start since the opening day of the season and combined well with Son late in the first half, but the forward was unable to head in the England international`s cross from a tight angle.

Fulham pushed on after going behind as Antonee Robinson weaved his way into Spurs` penalty area in the dying seconds of the first half and found Maja who set up Lemina, but the Gabon midfielder`s shot flew over the crossbar.

Fulham stayed 18th in the table and deep in relegation trouble, three points behind Newcastle United and Brighton & Hove Albion.

(Reporting by Shrivathsa Sridhar in Bengaluru, editing by Ed Osmond)