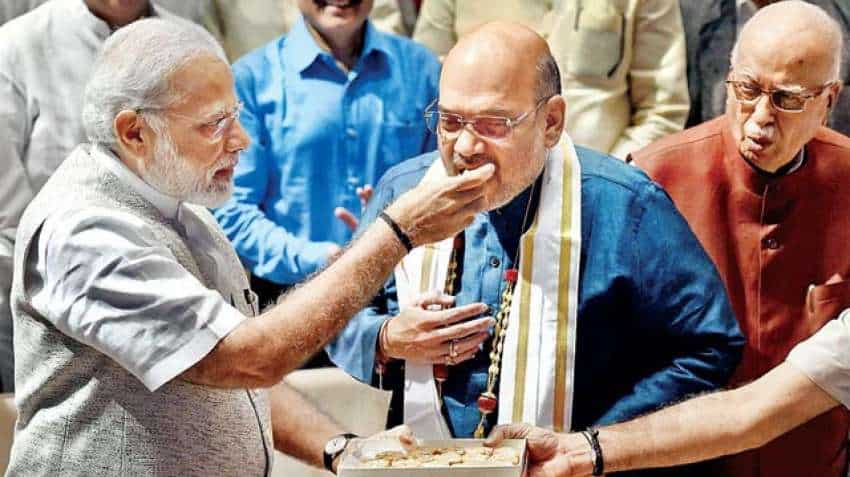 Since his appointment as BJP President in 2014, Amit Shah has been instrumental in leading the party to electoral victories in many states. Source: PTI - File
Written By: ZeeBiz WebTeam
RELATED NEWS

"Birthday wishes to Shri @AmitShah Ji. Our nation is witnessing the dedication and excellence with which he is contributing towards India`s progress. His efforts to make BJP stronger are also noteworthy. May God bless him with a long and healthy life in service of India," the Prime Minister said in a tweet.

Born in 1964 in Mumbai, Shah was involved with the Rashtriya Swayamsevak Sangh (RSS) from his early days.In Gujarat, Shah served as the Home Minister in the BJP government, which was helmed by Modi, who was the Chief Minister of the state at that time.Referred to as `Chanakya` of modern-day politics for his organisational abilities, Shah brings with him a vast experience in the political arena.

Since his appointment as BJP President in 2014, Shah has been instrumental in leading the party to electoral victories in many states, particularly in the North-East. He was party in-charge of Uttar Pradesh in 2014 and helped BJP and its allies win 73 out of 80 seats in the general elections.In the 2019 Lok Sabha polls,

Shah also managed BJP`s election campaign and rigorously campaigned at the same time, which lead the party winning 303 seats. Hence, BJP became the first party in India, since 1971, to return with a full majority.

Shah is a first-time Lok Sabha MP from Gandhinagar and was inducted into the cabinet under the second tenure of the Modi government. He was given the charge of Home Affairs. (ANI)