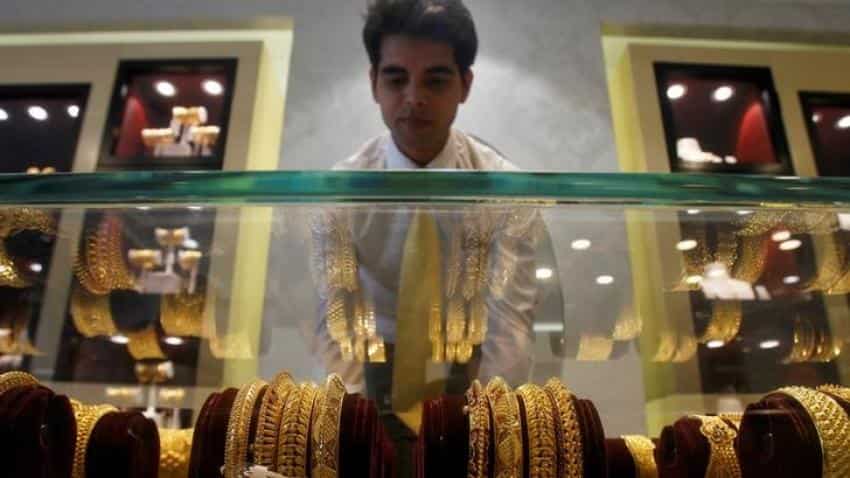 A salesman arranges gold bangles in a display case inside a jewellery showroom on the occasion of Akshaya Tritiya, a major gold buying festival, in Agartala. Pic: Reuters
Written By: Reuters
RELATED NEWS

Gold inched lower on Friday as Asian stocks and the dollar firmed after upbeat U.S. private sector job figures appeared to boost the prospects for an interest rate hike this month.

Investors will be looking out for further clues on the outlook for rates in U.S. non-farm payroll data due later in the day.

* The dollar hit a one-week high against the yen early on Friday and was last at 111.61 yen.

* U.S. factory activity ticked up in May after slowing for two straight months and private employers stepped up hiring, suggesting the economy is regaining speed after struggling at the start of the year.

* The U.S. Federal Reserve sent a strong signal on Thursday that it would raise interest rates this month and soon begin shedding some of its $4.5 trillion in bond holdings, despite some weak recent U.S. inflation readings.

* President Donald Trump on Thursday said he would withdraw the United States from the landmark 2015 global agreement to fight climate change, a move that fulfilled a major campaign pledge but drew condemnation from U.S. allies and business leaders.

* Former FBI Director James Comey will testify next Thursday before a U.S. Senate panel investigating Russia`s alleged meddling in the 2016 U.S. election, in a hearing that could be difficult for Trump.

* British Prime Minister Theresa May`s gamble on a snap election was under question on Thursday after the latest opinion polls showed her Conservative Party`s lead was dwindling just a week before voting begins.

* The European Central Bank will sound a little more optimistic on the economy at its June 8 meeting and could raise its assessment of risks to balanced or begin discussing shift from its bias to ease policy, a Reuters poll of economists showed.