The currency bloc was a surprise economic star last year, outpacing its peers, but the rate of expansion is steadily slowing and a succession of Reuters polls have said it has already peaked -- although a recession is seen as unlikely. 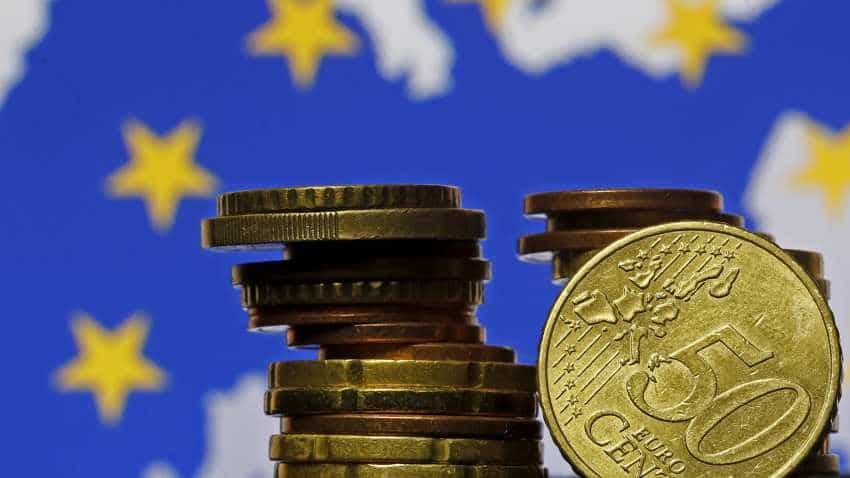 Protectionist policies on trade are likely to tap the brakes significantly on global growth and have already caused turmoil in financial markets. Image source: Reuters
Written By: Reuters
RELATED NEWS

More evidence that euro zone growth has slowed this year is likely to be seen on Thursday, when surveys are expected to show an escalating global trade war is hurting producers.

The currency bloc was a surprise economic star last year, outpacing its peers, but the rate of expansion is steadily slowing and a succession of Reuters polls have said it has already peaked -- although a recession is seen as unlikely.

Protectionist policies on trade are likely to tap the brakes significantly on global growth and have already caused turmoil in financial markets.

Manufacturers have been spooked by the escalating trade war between the United States and its trading partners although reports China is to send a delegation to Washington for discussions may allay some of those fears.

Thursday`s composite Purchasing Managers` Index (PMI) for the euro zone, compiled by IHS Markit, will be the first gauge of the economy`s health in August.

A reading above 50 indicates expansion, and if the 54.3 forecast in a Reuters poll for a composite PMI is realised it will confirm growth remains robust but is far weaker than the decade-high pace witnessed earlier this year.

"European growth momentum is losing steam. (But) We only expect a small setback compared to last month, despite relatively weak European financial markets so far in August," Nordea economists said.

With growth holding strong and inflation confirmed above the European Central Bank`s target in July, ECB policymakers are unlikely to go back on plans to end its 2.6 trillion euro bond buying programme this year.

They are expected to begin raising borrowing costs in the second half of 2019.

Across the Atlantic, where growth has also already peaked, the U.S. Federal Reserve has been tightening policy and is expected to plough ahead with planned interest rate hikes. It is alone among peers in carrying on with a tightening campaign, which has driven the dollar sharply higher.

The Bank of England raised interest rates earlier this month, above financial crisis lows, but signalled it was in no hurry to raise them further.

Trade fears in Britain are focused on what deal it can strike with the European Union before leaving the bloc at the end of March. If no agreement is struck, market watchers expect sterling to fall and growth to slow further.

IN THE HOLE
Central bankers meet at the Fed`s annual retreat in Jackson Hole from Thursday and while the agenda has yet to be released, no big policy pronouncements are expected.

"However, there is always headline risk at these events, especially with media interviews of policymakers. In our view, the risk is likely two-way," Credit Suisse economists wrote to clients.

"FOMC members could stress that they intend to hike faster than market expectations, or just as easily focus on global growth and the risks of a strong dollar."

Trade war concerns are likely to feature heavily in discussions among the central bankers.

A Chinese delegation will meet U.S. representatives, China`s Ministry of Commerce said in a statement, with the Wall Street Journal reporting that talks will take place in Washington on Aug. 21 and 22.

The world`s two largest economies are due to slap tariffs on billions of dollars of each other`s goods on Thursday, in addition to levies that took effect on July 6.

"There is still a great deal of difference between agreeing to talk and coming to an agreement," said CMC Markets analyst Michael Hewson.

"For now it appears an escalation has become less likely, hence yesterday`s rebound in equity markets," he added, referring to an overnight rally on Wall Street.