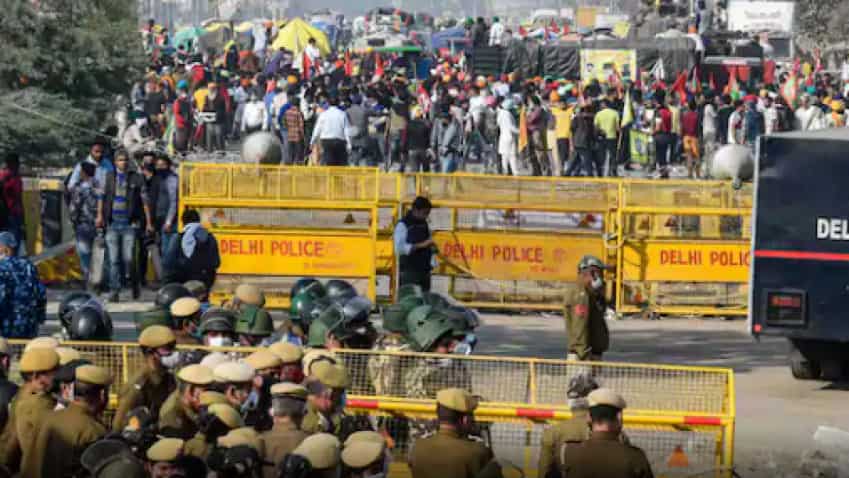 Farmers protest - Delhi Traffic: As the ongoing farmers` agitation entered the tenth day, the traffic movement remained affected in the national capital region on Saturday morning with multiple borders between Delhi and neighbouring states still closed for commuters. Delhi Traffic Police on Saturday appealed to citizens to take alternative routes as along with Singhu, Auchandi, Lampur, Piao Maniyari, Mangesh, Tikri, and Jharoda borders are closed for all kinds of traffic movement.

The traffic police said Jhatikara border is open only for two-wheeler traffic, while the Badusarai border is open only for light motor vehicles like cars and two-wheelers. Commuters coming from Haryana are advised to take alternate routes via Safiabad, Saboli, NH8/Bhopra/Apsara borders/ Peripheral expressway. Available open borders between Delhi and Haryana are-- Dhansa, Daurala, Kapashera, Rajokri NH 8, Bijwasan/Bajghera, Palam Vihar, and Dundahera. The police further informed that traffic has been diverted from Mukarba and GTK road, and asked the citizens to avoid Outer Ring Road, GTK road, and NH 44.

Among the borders with Uttar Pradesh, Gazipur border on NH 24 is closed for traffic from Gaziabad to Delhi, and the Chilla border on Noida link road is closed for traffic from Noida to Delhi. People coming from Gaziabad are advised to avoid NH 24 for coming to Delhi and use Apsara/Bhopra/DND instead. Commuters from Noida are advised to avoid Noida link road and use DND instead. Thousands of farmers, mostly from Punjab, have gathered in and around Delhi to protest against the three farm laws, passed in the Monsoon Session of Parliament in September. The farmers` agitation in Delhi entered the tenth day today, with a large number of farmers gathered in and around the national capital to protest against the three farm laws. Ahead of the fifth round of dialogue with agitating farmers on Saturday, Union ministers Amit Shah, Rajnath Singh, Piyush Goyal, and Narendra Singh Tomar met Prime Miniter Narendra Modi at his residence in New Delhi. On his way to the Prime Minister`s residence, Union Agriculture Minister Tomar told the media that the meeting with farmers will start at 2.00 pm today, and added that he is hoping for a positive conclusion of talks. On Thursday, the farmers held the fourth round of talks with the Centre, during which, they said the government talked of some amendments to the farm laws.

Bharatiya Kisan Union spokesperson Rakesh Tikait said the government has given assurance concerning minimum support price. "It seems that their stand over MSP will be fine. The talks have made little progress," Tikait said. On December 3, the farmers held the fourth round of talks with the Centre and said the government had talked of bringing some amendments to farm laws. In the fourth round of the meeting, farmer leaders suggested the government to hold a special session of the Parliament and sought the abolition of the three farm laws. "The government will discuss points that emerged at the meeting on Friday and hopes that talks will move towards finality when the next round of discussions are held on Saturday," Union Agriculture Minister Narendra Singh Tomar had said.

He reached out to protesting farmers over their demands, saying MSP will not be touched, the government was open to their suggestions for parity between mandis under APMC Act and that outside, for disputes under the new farm laws being adjudged in courts and for registration of traders. Previously on December 1, during the first meeting with Centre after the agitation reached Delhi, the farmers had refused the tea invitation from the government stating that they are demanding their right from the government and not anything else. The farmers are protesting against the Farmers` Produce Trade and Commerce (Promotion and Facilitation) Act, 2020, the Farmers (Empowerment and Protection) Agreement on Price Assurance and Farm Services Act, 2020, and the Essential Commodities (Amendment) Act, 2020.