EU pushes for October Brexit agreement, but threatens no deal

May promised new proposals to reassure Dublin that it would not end up with a "hard border" with the British province of Northern Ireland but warned that she too could live with a no-deal outcome -- though many around the summit in Salzburg do not believe that that is a credible threat. 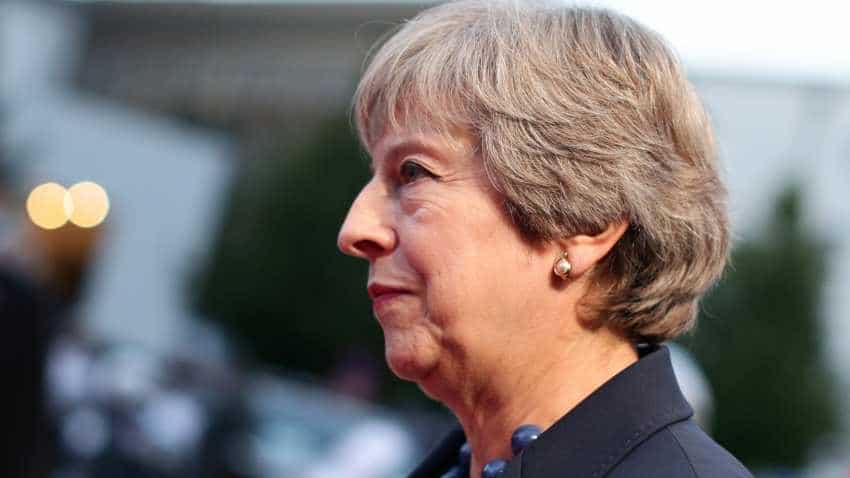 May faces a fight with angry Conservatives at her party`s conference in 10 days. Image source: Reuters
Written By: Reuters
RELATED NEWS

European Union leaders will push for a Brexit deal next month but warned British Prime Minister Theresa May on Thursday that if she won`t give ground on trade and the Irish border by November they are ready to cope with talks collapsing.

"Don`t worry, be happy," joked EU chief executive Jean-Claude Juncker after telling reporters at a summit in Austria that the Europeans had full plans in place in the event there was no deal before Britain leaves next March.

May promised new proposals to reassure Dublin that it would not end up with a "hard border" with the British province of Northern Ireland but warned that she too could live with a no-deal outcome -- though many around the summit in Salzburg do not believe that that is a credible threat.

She said her "Chequers" proposals for trade with the EU, intended also to resolve arguments on the border of Northern Ireland, were the only way forward. EU leaders repeated their view the plans would undermine their cherished single market.

But leaders also tried to put a positive spin on their 24 hours of talks; summit chair Donald Tusk said he was more optimistic about getting agreements both to ease Britain out gently and to sketch out a future free trade pact.

Tusk said a Brussels summit on Oct. 18 would be a "moment of truth" to overcome remaining big problems and leaders pencilled in the weekend of Nov. 17-18 to formalise a final agreement.

But May and German Chancellor Angela Merkel were among those who stressed there was still "a lot of work" to do.

May faces a fight with angry Conservatives at her party`s conference in 10 days. They deride her willingness to bind Britain into much EU regulation in return for free trade and some would prefer a no-deal "hard Brexit" in March, despite warnings that would ravage the British economy.

EU leaders understand that she can give little away before the conference ends on Oct. 3. However, they hope their negotiator, Michel Barnier, can secure her agreement next month to what will be new EU proposals that will be fundamentally unchanged but may be politically more palatable, especially on Northern Ireland.

MERKEL, MACRON SCEPTICAL
"It was clear today that we need substantial progress by October and that we then aim to finalise everything in November," Merkel told reporters as the summit ended.

"But there is still a lot of work to do on the question of how future trade relations will look," she added. "You can`t belong to the single market if you are not part of the single market, but you can develop a lot of creativity to find practical, good, close solutions."

French President Emmanuel Macron rammed home the message: "It was a good and brave step by the prime minister," he said of her trade plan. "But we all agreed on this today, the proposals in their current state are not acceptable. "The Chequers plan cannot be take it or leave it."

The EU also insists on a "backstop" clause in any withdrawal treaty. This would keep Northern Ireland under EU economic oversight if London and Brussels cannot agree a trade pact to keep UK-EU borders open after a transition period ends in 2020 -- an idea that May and a small party in the province that props up her minority government oppose.

"We need to ensure that nothing is done which effectively carves Northern Ireland away from the rest of the United Kingdom," May told reporters after Tusk had briefed her on the discussions the other 27 had on Brexit over lunch.

Irish Prime Minister Leo Varadkar said there was no chance the EU would compromise on its demands and rejected speculation the other countries would be tempted to fudge the Irish issue until later; but he also said he thought there would be a deal.