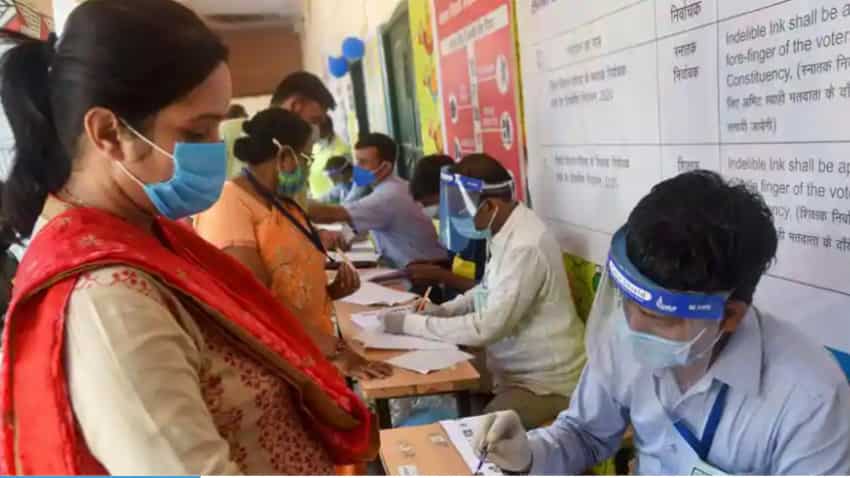 Bihar Assembly elections 2020: As many as 1,066 candidates are in the fray including 42 from Rashtriya Janata Dal (RJD), 35 from Janata Dal (United), 29 from BJP, 21 from Congress and 8 from Left. Source: PTI
Written By: ANI
Edited By: ZeeBiz WebTeam
RELATED NEWS

Among other seats going to polls in the first phase are Jamui Assembly constituency where BJP fielded Shreyasi Singh, a national shooter and the daughter of former Union minister Digvijay Singh. The campaigning for the first phase of the high-decibel Bihar Assembly Elections ended on October 26 evening. Bihar is witnessing a triangular contest with the ruling JDU-BJP alliance and grand alliance (RJD, Congress and others) and Chirag Paswan`s Lok Janshakti Party (LJP), which is eying the role of a kingmaker in case of a hung Assembly. On one side is the NDA which includes JD-U (115 seats), BJP (110 seats), Vikassheel Insaan Party (11 seats) and Jitan Ram Manjhi`s Hindustani Awam Morcha (7 seats). Mahagathbandhan which picked Tejashwi Yadav as chief ministerial candidate constitutes RJD (144 seats) and the Congress with 70 seats.

Other alliance partners include the CPI-ML (19 seats), CPI (6 seats), and the CPIM (4 seats). LJP is contesting 136 seats on its own and fielded candidates against all JD-U nominees and only a few against BJP. More than 52,000 voters belonging to Senior Citizen (above 80 years of age) and PwD (Persons with Disabilities) categories have opted to exercise the facility to vote through postal ballots in the forthcoming phase 1 of Bihar Legislative Assembly elections 2020.

The Election Commission has already mandated face masks, hand sanitizers, thermal scanners, gloves, face shields, and PPE kits during the electoral process while ensuring social distancing norms. It also laid down guidelines for each polling station, including sanitization a day before the poll, markers for social distancing, putting up of COVID-19 awareness posters, and availability of hand gloves.