The reason for rising rates included massive exports as high as 15 lakh tonnes and this caused short in supply. 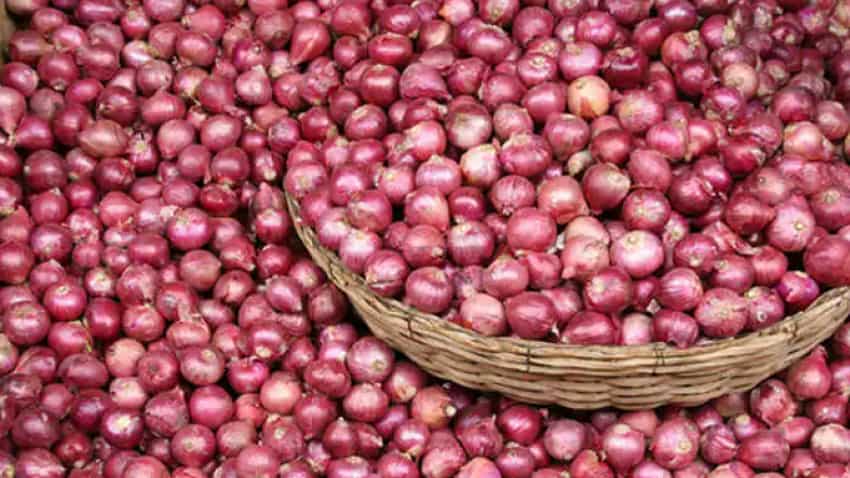 Among the steps taken by government is to impose onion stock limit at 25 MMTC for wholesalers and 2MMTC for retail traders till December 31. Also, to bolster supply, MMTC will soon float tender for import of Red Onion. PTI
Reported By: ZeeBiz WebTeam
Written By: ZeeBiz WebTeam
Edited By: Harish Dugh
RELATED NEWS

Nafed floats bids for supply of 15,000 tonnes of imported red onions by Nov 20

After onion prices jumped over the recent weeks, central government has taken a number of steps to cool them down. The reason for rising rates included massive exports as high as 15 lakh tonnes and this caused short in supply. Supply in domestic market reduced from the month of September itself and since supplies were not reaching the market, it led to artificial price escalation.

Among the steps taken by government is to impose onion stock limit at 25 MMTC for wholesalers and 2MMTC for retail traders till December 31. Also, to bolster supply, MMTC will soon float tender for import of Red Onion.

The Essential Commodities (Amendment) Act, 2020 provides for the circumstances or imposition of Stock limit under extra ordinary price rise. The All India average retail price variation of onions as on 21.10.2020 when compared to last year is 22.12 % (from Rs 45.33 to Rs 55.60 per/Kg) and when compared to last 5 years average is 114.96 % (from Rs 25.87 to 55.60 per/ Kg). Therefore, the prices have increased by more than 100% when compared with average of last 5 years and thus the price triggers under EC Act have been reached. Thus the stock limit on the onions has been imposed with effect from today which is 25MT for Whole Sellers and 2MTfor Retailers for a period up to 31-12-2020.

In order to moderate the price rise, the government took a pre-emptive step by announcing a ban on onion export on 14.09.2020 so as to ensure availability to domestic consumers at reasonable rates, before the expected arrival of Kharif onion. Thus, the retail price rise was moderated to some extent, but recent reports of heavy rainfall in the onion growing districts of Maharashtra, Karnataka, Andhra Pradesh and Madhya Pradesh have created concerns about damage to Kharif crop.

These developments on the weather front have contributed to the sharp increase in onion prices.

To tide over the present situation, the government has stepped up disposal of Onions through the built up onion buffer stock from the Rabi onion -2020 of I LMT which was doubled since the quantity of last year.

The release of onion from the buffer stock is being carried out swiftly but in a calibrated manner from the second half of September, 2020 to major Mandis as well as to retail suppliers such as Safal, Kendrya Bhandar, NCCF, TANHODA & TANFED (Govt. of Tamil Nadu), and NAFED outlets in major cities and also through State Governments.

Presently Govt. of Assam, and Govt. of Kerala (Horticulture Product Dev. Corp. Ltd) are being supplied from the retail disposal mechanism. Andhra Pradesh, Telangana and Lakshadweep have also placed their requisition for onions, which are being dispatched.

Further, Onions are also being disposed off through Open Market Sales. This will be stepped up further to bring down the price rise.

An estimated Kharif Crop of 37 LMT is also likely to start arriving in the Mandis that will add to the availability of Onions.

To additionally ensure availability of onions in the Mandis, the government has taken steps to facilitate import of onion and on 21.10.2020, the government has relaxed the conditions for fumigation and additional declaration on Phytosanitary Certificate under the Plant Quarantine Order, 2003 for import up to December 15, 2020.

The Indian High Commissions in the relevant countries are already contacting the traders for ensuring greater imports of onions to the country. Such consignments of imported onions, which arrive on Indian ports, through land or sea, without fumigation and endorsement to that effect on the PSC, would be fumigated in India by the importer through an accredited treatment provider. Such consignments after fumigation would be released with no additional inspection fee and an undertaking will be obtained from the importers that the onion will be used only for consumption and not for propagation. Such consignments of onions for consumption will not be subjected to four times additional inspection fee on account of noncompliance of conditions of import under the PQ order, 2003.

Apart from facilitating the import by the private traders, it has also been decided that MMTC would start importing of red onions to meet the demand supply gap.

Requisite action under the Prevention of Black-marketingg and Maintenance of Supplies of Essential Commodities Act, 1980 would be taken to prevent any hoarding, black marketing of Onions by unscrupulous elements.

Nafed floats bids for supply of 15,000 tonnes of imported red onions by Nov 20