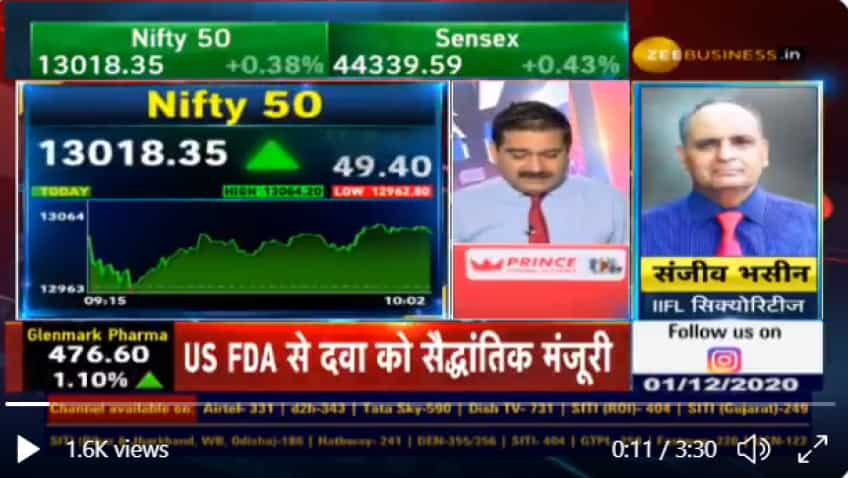 Talking about his previous calls, the market analyst said he had identified his picks including, DCB Bank, Federal Bank, GAIL, etc at very low rates and they have done stunningly well.
Reported By: ZeeBiz WebTeam
Written By: ZeeBiz WebTeam
Edited By: Manas Tiwari
RELATED NEWS

In this episode of ‘Bhasin ke Hasin Share’, market analyst Sanjiv Bhasin told Zee Business Managing Editor Anil Singhvi that investors should be a bit cautious on large cap stocks, especially those belonging to banks and metals. He said this is because stocks of these sectors have already seen consensus rally. He said now he would be focusing on Pharma and IT, along with mid-caps to fetch good returns from his investment.

Having said it is beginning of the re-rating of PSUs, Bhasin said 2021 belongs to Public Sector Undertakings.

Talking about his previous calls, the market analyst said he had identified his picks including, DCB Bank, Federal Bank, GAIL, etc at very low rates and they have done stunningly well. Saying that these stocks still have good momentum, he recommended to book partial profits from these stocks and save the profits.

Find detail coverage in the video below:

“Second half of December could see some erosion in Index points, so be watchful,” he said.
He said as he claimed in the beginning that Pharma and IT are the sectors to watch out for, his pick would be from these sectors only. He suggested to buy Cipla around Rs 749-750 by putting stoploss at Rs 737 but Cipla will reach Rs 775, he said.

In technology, he said he is bullish on two stocks—Wipro and Tech Mahindra. However, his buy recommendation from this sector for the day was Tech Mahindra. He suggested to buy this stock for Rs 878-879 for a target of Rs 92. He put a stoploss at Rs 868 for this stock.

Before signing off, Bhasin also gave a pick from cash market—NBCC. Picking this stock, he said this stock is stock of 2021 for him. He said his target for this counter is Rs 45, however, if the stock sees three, four times growth in long-term, he won’t be surprised.

He said his claims find relevance in the fact that construction activities have begun on war footing as India entered in unlock phase. “The stocks to benefit maximum from this development are the stocks like NBCC, which has been facing order book execution problem. Also, NBCC will soon be able to begin its construction activities with full swing on many of its projects with its maximum work force, only in matter of weeks,” Bhasin added.