Anil Singhvi, Managing Editor at Zee Business said that the decline in lumber price is a big and positive news for paper stocks. 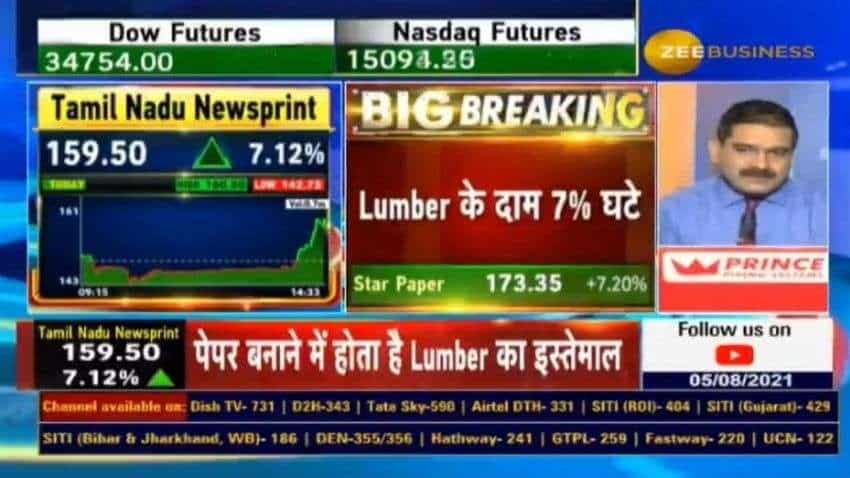 The price of lumber decreased by 7 percent on Thursday because of which lots of movement were seen in the paper stocks. Speaking on the topic Anil Singhvi, Managing Editor at Zee Business said that this is a big and positive news for paper stocks.

The Market Guru asked investors to focus especially on two paper stocks that is Star Paper and Tamil Nadu Newsprint.

He added that the benefit of this news will be enjoyed by almost all the paper stocks and explained that paper companies enter into a long-term contract for numbers and Star Paper and Tamil Nadu Newsprint are the companies whose contract have ended in the month of July. And now the new contract will be on lower price.

Giving details about Star Paper, Sumeet said that the stocks of the company has shown a good move and it can go further. "We can see star performance in Star Paper, " he said.

He added that a target of Rs 180 will be formed and if it breaks then more upward trend will be seen.

While, Market Expert Himanshu Gupta spoke about Tamil Nadu Newsprint and said that it can show an upside stock of Rs 168 in coming days. He said that it has a very strong lower base of 154-155 and suggested investors to keep stop loss below it and hold the existing position.

He also said that fresh positions can also be bought at this level. He suggested to put a stop loss at Rs 153 and keep a target of Rs 167 - 168.