Even as Tata Consultancy Services’ (TCS) Q2FY22 results have been lower than the street estimates, the movement of the stock could be a key determinant when the markets reopen on Monday 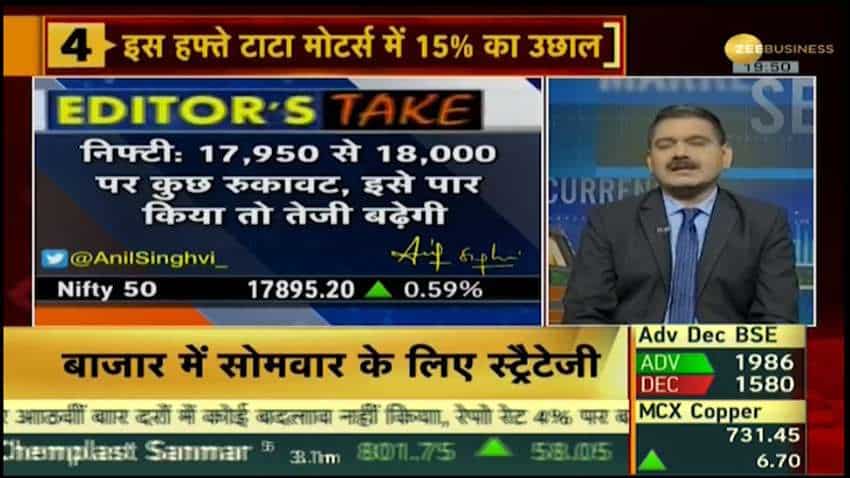 Nifty50 gained 2 per cent over the week to end around 17,895 on Friday while Nifty Bank also gained 1.5 per cent

Zee Business Managing Editor Anil Singhvi said that the domestic markets capitalised on great action in the US markets and witnessed high action on the last trading day of the week. The Nifty50 managed to close at levels near its lifetime highs. The Friday closing is historically its biggest closing ever, he added.

Both, Sensex and Bank Nifty were among great action.

The mid cap and small cap traded with strength. The cues for next week look strong, the Market Guru said. He lists three triggers to watch out for, when the markets reopen on Monday.

1) Even as Tata Consultancy Services’ (TCS) Q2FY22 results have been lower than the street estimates, the movement of the stock could be a key determinant when the markets reopen on Monday.

After the stock markets closed on Friday, and ahead of the results announcement on Friday, Singhvi had said that markets would be keenly watching the results of bellwether. While TCS is an index heavyweight, IT as a sector also carries a lot of weight in the markets, the Managing Editor said.

2) Mid cap and small segments have also been trading with considerable strength and they are key drivers to how traders trade on a particular day, Singhvi said.

The stocks markets will also take cues from the US markets, job data and Dow Futures on Monday.

The US economy created the fewest jobs in nine months in September amid a drop in hiring at schools and worker shortages, this report said.

Some attributed that at least partly to jobs lost after vaccine requirements were imposed to combat the surge of the Delta variant, report further said adding that the unemployment rate dropped to an 18-month low of 4.8 per cent.

3) The third trigger will come from the FII and DII data.

Support, Resistance for Bank Nifty - As for Bank Nifty the support is between 37,500 and 37,700 and the hurdle is at 38,100. Once this level is breached, Bank Nifty will be open for big action, he further said.

The week gone by was quite eventful for the stock markets as Nifty50 ended at record highs amid rising crude oil prices and favourable US market cues. The Reserve Bank of India (RBI) Monetary Policy announcements also soothed the domestic markets. While maintaining the status quo on key policy rates and continuing its accommodative stance, the Central Bank assured the markets that the liquidity will not be scaled back.

The Nifty50 gained 2 per cent over the week to end around 17,895 on Friday while Nifty Bank also gained 1.5 per cent.