Stock market equity benchmarks BSE Sensex and NSE Nifty on Friday closed in red as the former lost 361 points and latter shed 86 points to close at 58,766 and 17,532, respectively. 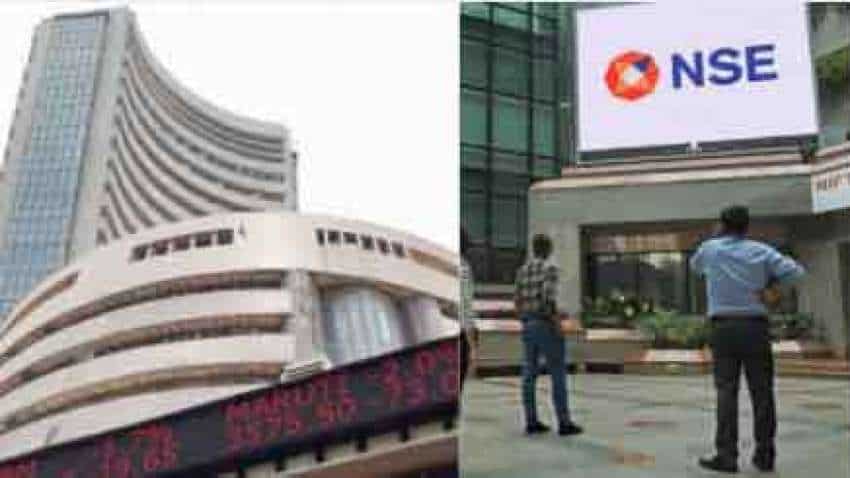 Over 50% of PMS schemes outperform Nifty50 in September; small & midcaps among top performers

Stock market equity benchmarks BSE Sensex and NSE Nifty on Friday closed in red as the former lost 361 points and latter shed 86 points to close at 58,766 and 17,532, respectively. With this, the Indian markets ended up closing in the red for the fourth consecutive trading session on Friday.

Among the NSE indices, Nifty CPSE, Nifty PSE, Nifty PSU Bank, Nifty Energy and Nifty commodities were the top gainers amid various triggers related to power, energy and oil sectors from across the world. The NSE index that gained the most was Nifty CPSE, which ended the week up 184 points. Nifty CPSE gained over 8 percent to close at 2367 for the week ended October 1.

As per the National Stock Exchange (NSE), NIFTY CPSE Index has been constructed to facilitate Government of India's initiative to disinvest some of its stake in Central Public Sector Enterprises (CPSEs) through ETF route. The index comprises of select 10 CPSEs.

Among other NSE indices, Nifty CPSE was closely followed by Nifty PSE, Nifty PSU Bank, Nifty Energy and Nifty commodities, which gained 276 points or 7.2%, 143 points or 6.1%, 1284 points or 5.9% and 157 points 2.8 % respectively, beating the domestic equity market indices NSE and BSE over the five days trading sessions that ended October 1. Of NSE losers, Nity IT led the indices pack by falling 2322 points or 6.3% to settle at 34,780. Nifty services sector, Nifty financial services, Nifty private bank and Nifty 100 Quality 30 were other indices that topped the Nifty loser's chart. 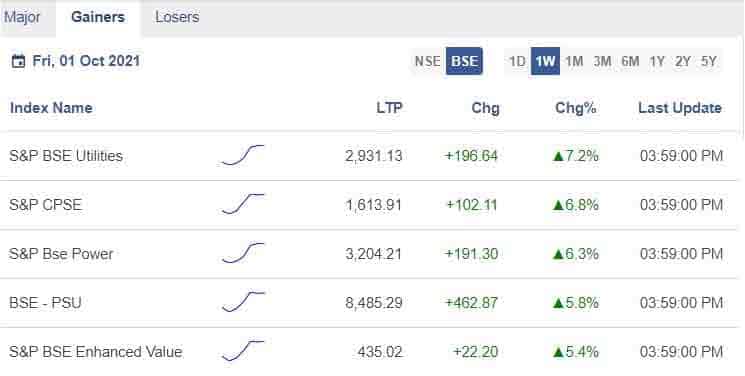 The drag in these indices that also impacted the equity benchmarks Nifty50 and BSE Sensex were led by software, IT and telecom shares.

The Organization of the Petroleum Exporting Countries and allies, known as OPEC+, meets on Monday. "The group is slowly unwinding record output cuts made last year, although sources say it is considering doing more," said the Reuters report.

Talking about action energy stocks, Mohit Nigam, Head - PMS, Hem Securities, said, “The rally is due to the news circulating the Electricity Amendment Bill 2021 which was presented in Budget 2021 if passed will be beneficial for the many players in the power industry.”

“The bill plans to delicense state monopolies in power distribution and open them for competition. This way the consumer has the choice in choosing its power service provider,” he said.

As China has been facing acute power shortage and tight coal supplies, it has turned out to be a boon for Indian shares in this space.

The energy shortage in China is currently fueling the rally in power and other related stocks, not only in India but in developed markets too, said Ajit Mishra, VP- Research, Religare Broking Ltd

"We have been upbeat about our view on REALTY pack and that has played out really well. With regards to POWER and UTLITIES we expect some kind of consolidation after such run up. However; all the mentioned sectors, including REALTY have turned positive on a larger scale and that is why any major dips in them would be a buying opportunity but the dips could be really deep," said Mehul Kothari, AVP – Technical Research at AnandRathi.

Over 50% of PMS schemes outperform Nifty50 in September; small & midcaps among top performers