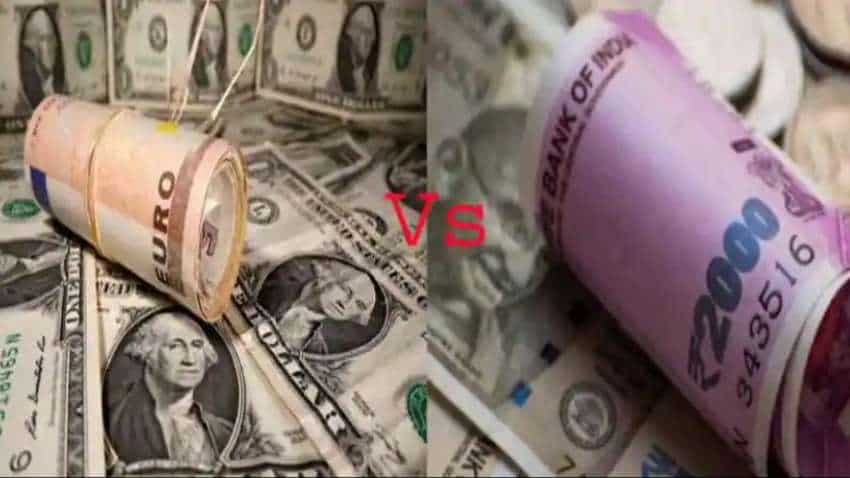 Investors are wary of the Fed meeting tonight and some are expecting that the Federal Reserve could provide more hints about scaling back its asset purchases later.
Written By: PTI
RELATED NEWS

The rupee declined by 26 paise to close at a nearly four-week low of 73.87 against the US currency on Wednesday due to a stronger dollar in overseas markets ahead of the outcome of the US Fed meeting and worries over China's Evergrande situation.

Forex traders said investors are awaiting cues on taper timeline and US Fed's projections on interest rates. The US Fed meeting outcome will be announced later in the day.

At the interbank foreign exchange market, the local currency opened at 73.70 and witnessed an intra-day high of 73.66 and a low of 73.93 against the US dollar in day trade.

The local unit finally settled at 73.87 a dollar, the lowest closing level since August 26. On Tuesday, the rupee had settled at 73.61 against the US dollar.

The dollar index, which gauges the greenback's strength against a basket of six currencies, was trading 0.02 per cent higher at 93.22.

"The Indian Rupee depreciated against the dollar on Wednesday, tracking losses in regional currencies. Most Asian currencies were weaker ahead of the Fed decision and worries about China's Evergrande situation and weighed on the local unit," said Sriram Iyer, Senior Research Analyst at Reliance Securities.

Investors are wary of the Fed meeting tonight and some are expecting that the Federal Reserve could provide more hints about scaling back its asset purchases later.

"Tonight's Fed meeting will be watched closely. The market is expecting US Fed to announce a timeline on taper, issue an inflation forecast, and update its interest rate projection via dot plot. We expect USDINR to remain within a range of 73.40-74.20 over the near term," said Anindya Banerjee, DVP, Currency Derivatives & Interest Rate Derivatives at Kotak Securities Ltd.

Meanwhile, HDFC Bank economists in a report said that the rupee can come under pressure as emerging market currencies face headwinds because of the events surrounding Evergrande in China.

"We remain cautious over this turning into a broader risk-off scenario, which could mean increased pressure on EM currencies, including the INR (rupee), while the dollar remains bid," the report by a team led by Abheek Barua said.

Evergrande, China's largest realty player, is under financial stress. It has over USD 300 billion in liabilities and has a USD 83.5 million interest payment on a bond due on Thursday and another USD 47.5 million next week.

The world is closely watching the events, particularly to see if the company honours its commitments and some watchers are comparing it with Lehman Brothers' case in the US that led to the 2008 global financial crisis.

Foreign institutional investors were net buyers in the capital market on Tuesday as they purchased shares worth Rs 1,041.92 crore, as per exchange data.