Anil Singhvi, Managing Editor, Zee Business, says, SmallCap index has gone up by more than 10% in the last five weeks. So, this is a way where you can invest and make money. During a candid radio chat with RJ Salil Acharya, Radio City, 91.1 FM, Mumbai, Mr Singhvi said people can invest in MidCap and SmallCap stocks sugar, metal and pharma companies 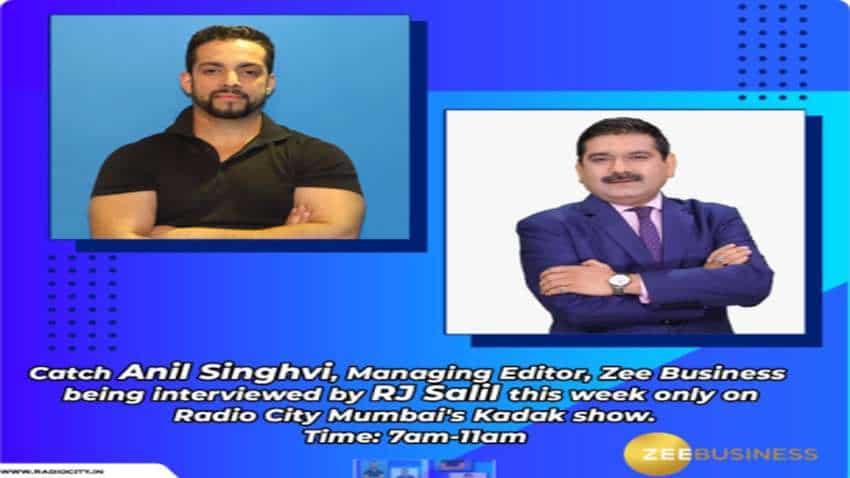 Market Guru said definitely there is slight uncertainty in the markets because the second wave of CORONA which is looking more dangerous than the first one, in terms of health
Written By: Jitesh Kumar Jha
Edited By: ZeeBiz WebTeam
RELATED NEWS

Anil Singhvi, Managing Editor, Zee Business, says, SmallCap index has gone up by more than 10% in the last five weeks. So, this is a way where you can invest and make money. During a candid radio chat with RJ Salil Acharya, Radio City, 91.1 FM, Mumbai, Mr Singhvi said people can invest in MidCap and SmallCap stocks sugar, metal and pharma companies.

Starting the radio chat, RJ Salil said, everyone, has started questing that it is not turning bullish as it was last year. People are bit confused and you have earlier already said that these results will be good because it is related to the last history. So, what should be the case now as suddenly people have started thinking about gold and fixed deposits and other similar things for the coming three-four months because they are not sure that what the companies will do in the coming three months.

He asked, what would be Mr Singhvi’s opinion about the stock market now. To which Mr Singhvi said, definitely, there is slight uncertainty, there is no doubt in it because the second wave of CORONA is looking more dangerous than the first one, in terms of health. In terms of wealth, this is not a harsh lockdown like the previous one, small works are happening. So, I feel the market will be range-bound in which at the upper side it will see some selling after reaching around the range of 15,000-15,200 and on the lower side, some buying will be seen between 14,000-14,200 range. So, there is no need to worry too much and there and there is no intention of being too much bullish. In such a condition, April and May are the two months on the name of SmallCap and MidCap. And, in the last five weeks, the Small Cap index has shown strength and has gone up by more than 10%. So, it is the place where you can earn and still, this is the place, where you should buy. So, leave the index, can move to SmallCap and MidCap shares.

In the next question, RJ Salil said, the biggest question is that people were quite positive about the atmosphere of vaccination and were also happy. Like now, there is a big shortage and if this continues for the next one year, which is realistic in India because of the population. Do you think that the market has already factored in the shortage of vaccine and the long-term effect of vaccination? Mr Singhvi in his reply to this question said, the market, the market – fortunately or unfortunately, as you like to say – is not giving a lot of reaction on the CORONA because from last year, the market has learned from CORONA that it will not be permanent and now we have the vaccine as well, maybe we are vaccinated today, tomorrow or after six months from here, it is going to happen.

Secondly, the economic recovery that has been seen coming after the CORONA definitely gives confidence to people in the market. So, it is such a situation that people with a view of three days, three weeks or three months, are worried but those who are thinking about the next three years have a feeling that the market is going to be strong and they have an opportunity to buy when there is a fall. So, there is a dilemma between the short term and long term. Therefore, the market will remain range-bound; supply will be seen when the market moves up and buying again when it comes down a bit. So, there is no fear of CORONA but there is little caution and a bit vigilant.

Continuing the chat further, RJ Salil said, as you told a while ago that the SmallCap stocks have gone up by 10% in the last five weeks. So, do you have a recommendation from the same? Mr Singhvi said, of course, it is simple, soft commodities, i.e. food and beverages, such as sugar, coffee and tea, their shares are quite bullish, and the prices of these commodities are increasing globally. Similarly, the prices of things that we wearing like yarn, cotton have gone up. So, every segment of a commodity is bullish.

So, buy the shares related to soft commodities that you like whatever you like in Sugar. There is a good movement in MidCap metals and you should buy here. On the other hand, a slight correction has happened in the MidCap IT and Pharma shares and you should buy there. And, metals will continue to be bullish. So, I think, now, taking advantage of the slight correction that is happening in the global market and the selling happening in this space you should invest in the MidCpa and SmallCap of sugar, metal, pharma and other soft commodities.