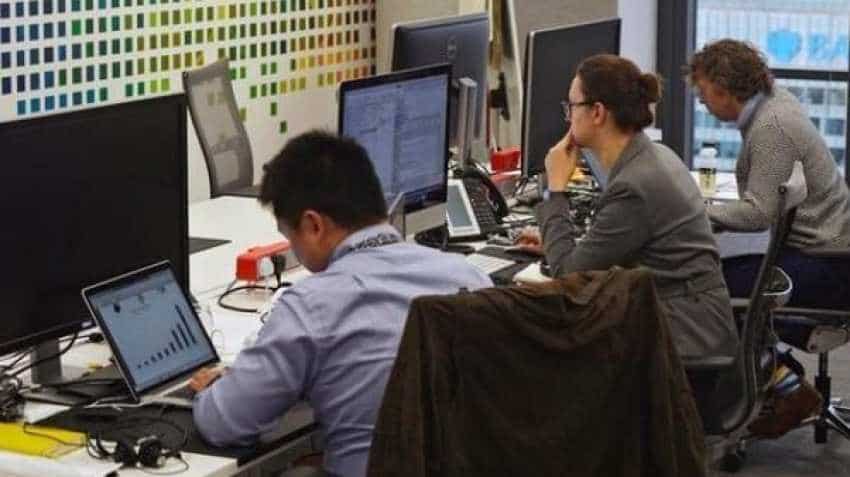 The markets are likely to hover around the peak levels pre-election results, any aggressive trading is not suggested, long positions in some large cap banking stocks can be maintained. Reuters

Banking stocks led the rally with Nifty Bank index gaining 1.5 per cent. Corporate earnings, investment flows and general elections are likely to be the key driving factors for Indian markets this eventful quarter. Jaikishan Parmar, Sr. Equity Research Analyst Angel Broking told Zee Business Online, ''The banking sector can be looked at in terms of the PSU banks, private banks and the NBFCs overall. Private Banks are largely a play on consumption and spending. With most governments preferring lower rates of interest, the private banks should be able to see a good growth in their lending books. We expect private banks to benefit post the elections.''

''The fortunes of the PSU banks will largely depend on the execution of the NCLT process. It has been largely a baby of the current NDA government and the PSU banks will benefit from the government returning to power with a majority. This will give them enough leeway to take the NCLT process to its logical conclusion and ensure that NPAs are recovered as early as possible.'' Parmad explained.

The Street is also anticipating further rate cuts by the central bank to reverse the economic slowdown and expecting a return of consumption demand, post the election results this year. The banks will continue to have a major share in the ongoing rally and the rally suggests that the earnings for Nifty will lie with the corporate banks

Commenting upon the NBFCs, Parmar mentioned, ''NBFCS would require two things viz. sufficient liquidity and a resolution to the IL&amp;FS story. The current government has been infusing Rs.40,000 crore through OMOs and another Rs.35,000 crore through dollar swaps. This is likely to keep the NBFC sector buoyant. This sector is likely to benefit under a stable government headed by the NDA.''

According to research note of American investment banker Goldman Sachs, India banking stocks have gained by c.12% over the last 3 months with SOE banks/NBFCs outperforming Bank Nifty (up 9%), which were partly driven by easing liquidity conditions and no negative developments within the NBFC space.

The markets are likely to hover around the peak levels pre-election results, any aggressive trading is not suggested, long positions in some large cap banking stocks can be maintained. Hopefully with a good monsoon better corporate earning vs and large push from liquidity can push the nifty to 12000 levels. However if the present NDA govt. gets a majority this time, it will be very important for domestic sentiments. Any number beyond 250 seats for BJP on a standalone basis will be a big positive, said Avinash Gorakshakar, Head research, Joindre Capital Services.