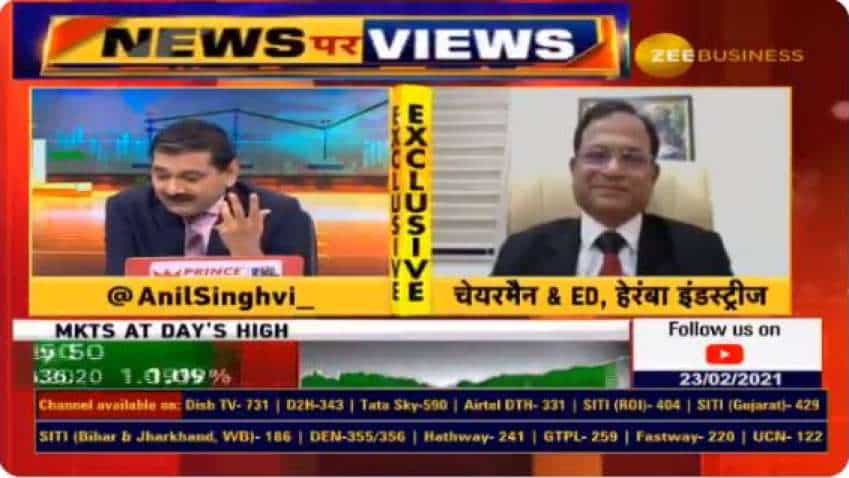 Market Guru said that investors can apply for this Heranba Industries’ IPO for small listing gains. He said that the listing gains are expected to be okay or the investors can invest in this issue with a long term perspective
Written By: Zee News
Edited By: Harish Dugh
RELATED NEWS

Heranba Industries IPO - Agrochemicals company Heranba Industries Initial Public Offering (IPO) opened today. The company plans to raise Rs 60 through this three-day IPO which will close on 25 February. The remaining is an Offer For Sale (OFS) which will be from the promoters of the company. Zee Business Managing Editor Anil Singhvi spoke to Heranba Industries' Chairman and Executive Director Sadashiv Shetty today. (#NewsParViews)

The Gujarat-based company will utilise the Rs 60 cr amount which will be raised via this IPO as working capital, Heranba Industries Chairman said. Over the years, the company has used internal accruals for capital expenditure, he added. There is no immediate requirement of capital for capex.

Exports to China have been coming down. Heranba Industries revenues from China business were 23 per cent in 2018 and these have now come down to 15 per cent. Meanwhile, imports have gone up from 6 per cent to 14 per cent now.

He said that there are certain key intermediates for the agrobusiness which come from China. It is not available in India and is therefore imported from China. He said that the export to China is greater which is favourable for the company and the country in terms of trade balance.

The company has already exported worth Rs 180 cr. The endeavour is now to reduce reliance on Chinese imports.

The company has also increased its focus on Research and Development (R&D) with 3 centres at present.

As per the industry standards, the valuations are also alright, the Market Guru opines. He said that the listing gains will be okay too. Investors should invest in an IPO if the listing gains are at least 15-20 per cent. The business is good and Heranba Industries is in the agro products business.

He said that there is growth visibility and the promoters of the company are also experienced.