A historic chapter has been scripted as NSE Nifty breached the historical 16,000-mark on Tuesday, August 3, 2021. 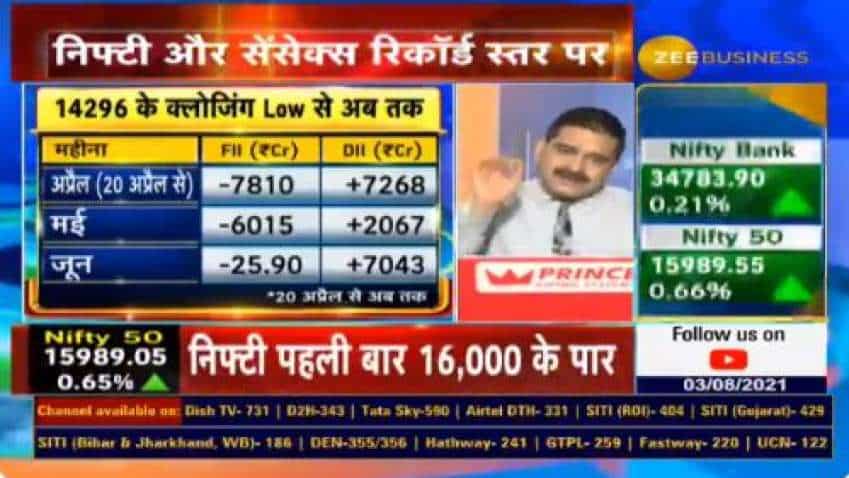 "Though every level has its own importance, but 16k was a psychological barrier and it is immensely satisfying to see Nifty finally surpassing it. This is sweet 16 for Nifty. "
Reported By: ZeeBiz WebTeam
Written By: ZeeBiz WebTeam
Edited By: Prashant Singh
RELATED NEWS

It’s the 1st time ever development! A historic chapter has been scripted as NSE Nifty breached the historical 16,000-mark on Tuesday, August 3, 2021. The development assumes big significance as this movement by Nifty 50 came after four to five failed attempts by the index in the last two months. In July, it came the closest to the psychological barrier of 16k when it climbed to 15,962, however, failed.

Talking about this historic landmark achieved by Nifty, Zee Business Managing Editor Anil Singhvi congratulated everyone, including the news channel viewers, and said, "Though every level has its own importance, but 16k was a psychological barrier and it is immensely satisfying to see Nifty finally surpassing it. This is sweet 16 for Nifty.  Going forward, we will see higher levels. Our coming generations will see levels, which we can't even imagine. It is the same as it was difficult to comprehend once that Nifty will soar from 1,000 mark to 16,000 mark in such a short span of time. One thing is sure that this level has excitement, vigour and participation."

Talking about what is the difference about this new high scaled by the Nifty, Zee Business Managing Editor said what distinguishes is that for the first time ever, retail investors have made good money. "This has happened for the first time. We have seen many bull and bear run earlier, but this time it is different. The kind of retail participation we have witnessed this time, either through mutual funds, SIPs, lumpsum or directly in the equity market, has been unparalleled," said Anil Singhvi.

On what led to this humongous participation from retail investors, the Market Guru said the pandemic allowed them to work from home and during which they generated interest in business news and stock market. "This helped them make good money. They made this money when all avenues to make money seem to have exhausted during the Covid 19 lockdown as businesses were stalled, jobs were limited and salary cut was the new normal. Secondly, retail investors usually enter in the market at the top, however, this time around, they not only made entry in the beginning, but stayed till the last. As markets started recovering after massive fall in March, the participation from all corners started increasing.  Thirdly, this rally does not reflect euphoria," said Singhvi.

Explaining further, the Market Guru said, it was very subtle and calculated rally. This time there were no unexpected move in stocks, neither we saw unusual positions in futures market that would put 15, 20 stocks in ban. "IPOs have been a great success story lately too. Rarely, any IPO is opening below its issue price. All those things that create euphoria is not there in this rally," he said.

Another big thing that distinguishes this rally from the previous ones is that FIIs did not drive this momentum, but it was all of us—the retail investors, said Zee Business Managing Editor. "Despite such selling pressure seen by FIIs in July, interestingly, Nifty hit life-time high only in the beginning of August. This means that we have our own strength, our own money and our own market, and FIIs should think it twice if they assume that they are the ones who run the market. Biggest thing that this rally taught us is that domestic money can also take the market to a new height. Another big change was observed in corporate actions. Usually, Indian promoters go berserk during this kind of rally. They go on expansion-spree, make big plans, take huge debt and make their balance sheets hefty. But they have totally avoided bad debt and NPAs situations by not falling trap to this rally and have rather worked on their existing plans. They have tried to cut down their debt, reduced cost and worked on strengthening their balance sheets.

The Market Guru said this 16k-mark is not just a milestone, but also a big achievement. The market has just not recovered and has witnessed rally in the last 1.5 years, but it has changed the way momentum is made, investment is done and the market behaves, said Singhvi, adding that we are witness to these changes.

Before concluding, he said this is the first such rally when no one is saying that operators are manipulating the market or certain players are taking it forward. "This time, it's different and it's for betterment and greater good. I have never seen that mid cap and small cap shares had shown this good bull run of 3 to 4 months and there is broader market participation too. I am very much satisfied with this 1.5 years rally. I have never seen this bull run in my carrier of 28 years that I witnessed in this 15 to 18 months," concluded the Market Guru.