Under the 'Medicine from the Sky' scheme, the Telangana government has started the medicine delivery on 9th September. 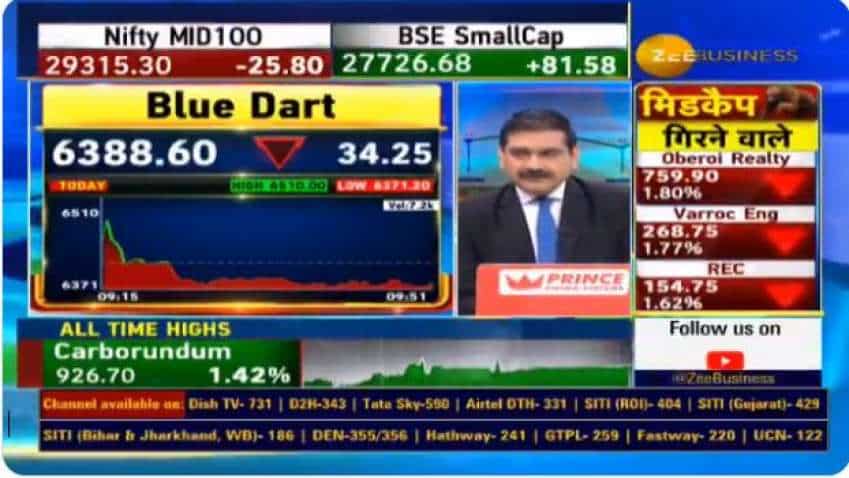 There is big news from Blue Dart. In Telangana, Blue Dart has now started delivery of the vaccines with the help of drones. As a pilot project, it has tied up with a start-up company Sky Air to deliver the medicine.

Under the 'Medicine from the Sky' scheme, the Telangana government has started the medicine delivery on 9th September. Research Analyst Ashish Chaturvedi shares more details on this and highlights triggers for good earnings.

He added that under the 'Medicine from the Sky' scheme of the Telangana government, Blue Dart has started trial delivery of medicines and emergency supplies in Hyderabad. It will continue to do this till 17th October.

Chaturvedi further said that this concept was initially discussed on Zee Business that how the government has eased the compliances and come up with the new drone policy.

Now because of this, in the logistic space, a huge revolution is going on. Zee Business also shared about the Zen Technologies shares, and this stock is continuously moving northward. As of now, there is a return of more than double.

How big is this drone reform? And how this is opening the Drone logistic market? Before the new drone policy, compliance was quite strict. Now instead of 25, 5 forms are only needed. The government has reduced the registration amount from Rs 3,000 to just Rs 100, he asserted. The big reform is that you don't need the approval to use drones. Apart from sensitive areas, two-third of areas come under the free zone. And for micro domains, the license is not needed, Chaturvedi stated.

After these relaxations, Zen Technologies and other logistic stocks are rallying continuously. However, Blue Dart is the only logistic stock with attractive triggers. Blue Dart's promoters background is extremely good. DHL has majority shares in this company, he informed.

Chaturvedi said that in the air logistic, it has 49 per cent market share. With such a huge scale, every second it completes 16 shipments. The logistic company also has a good fleet of vehicles, which is around 22,363.

As per the Kotak Securities report, the company is expected a CAGR of 34 per cent till FY24. So, there are a lot of triggers and the drone services have also started now, he said.