China’s key fertilizer companies have temporarily suspend exports to assure supplies in the domestic market. Zee Business Managing Editor Anil Singhvi it will benefit the Indian fertilizer exporting companies and the biggest benefit will be to RCF as it is in competition with China in terms of fertilizer exports. 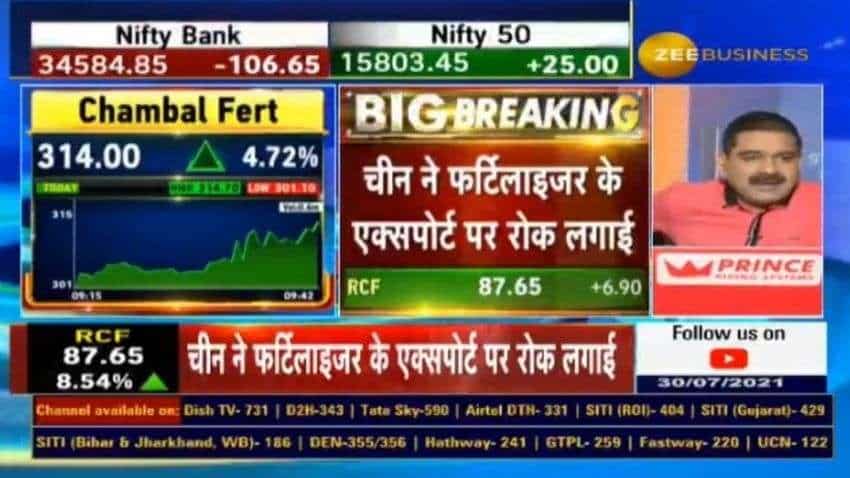 Some of China’s key fertilizer companies have said that they would temporarily suspend exports to assure supplies in the domestic market, according to a statement on the website of the National Development and Reform Commission (NDRC) on Friday.

Explaining the news, Zee Business Managing Editor Anil Singhvi said that China has suspended the exports of fertilizers which means that now the Chinese fertilizer companies will not be able to export their product.

"RCF, Coromandel, and Chambal are the three companies which export fertilizers, hence the focus will be on these companies," he added.

Deepanshu Bhandari, Anchor and Head-Research at Zee Business said that the prices of raw materials in China have increased because of which they have taken this action to support its domestic market.

He added that the direct impact of this action will be seen on India as the country imports fertilizers from China. "Direct beneficiary of this news will be the Indian companies as if the supply from China reduces or stops then the sales of domestic companies will increase," he added.

He added, "Chambal, RCF, Coromandel are showing good move and along with them good action can be seen in companies like Madras Fertilizers, National Fertilizers, Deepak Fertilisers, GNFC."

As per a report by Reuters, the state planner has said in a statement that it had summoned the fertilizer firms for a discussion against hoarding and speculation. It did not identify the companies. The move is the latest by Beijing to tackle the soaring prices of major raw materials.

Fertilizer prices in China, which is both a major consumer and producer, have hit records this year amid stronger demand from overseas, lower production domestically and high energy costs.

Urea futures prices on China’s Zhengzhou Commodity Exchange have surged by over a third since the start of the year. They hit record highs of 2,616 yuan ($405.19) per tonne on Thursday before easing 2.7% on Friday, the report added.

Spot urea prices were at 2,814 yuan a tonne in early July, according to China’s National Bureau of Statistics, up from 2,674 yuan the prior month.

As per the report by Reuters, State-owned enterprises (SOEs) like Sinofert Holdings Ltd and China National Offshore Oil Corp (CNOOC) are likely to be among those curbing exports, said Gavin Ju, principal analyst for fertilizers at CRU Group.