Most of the sugar related stocks have seen massive rally in the past 3 months, especially in the last one month. 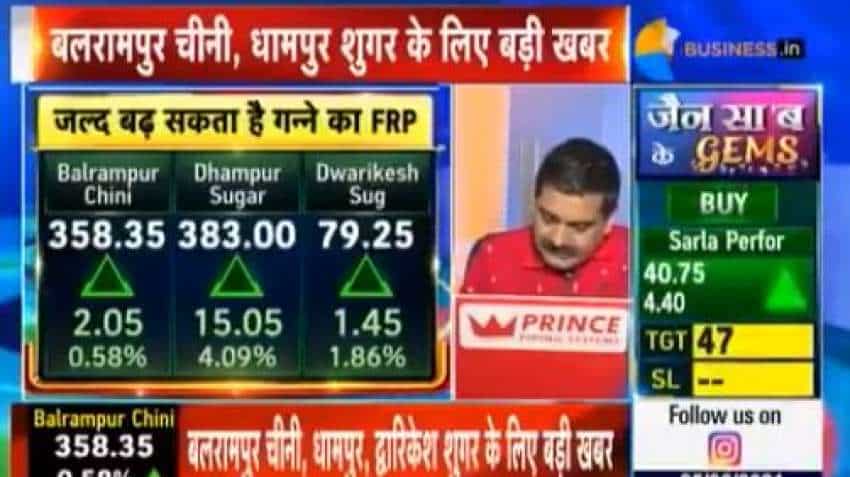 Most of the sugar related stocks have seen massive rally in the past 3 months, especially in the last one month. Top sugar shares, including Dalmia Bharat,  Balrampur Chini,  Dhampur Sugar, Dwarikesh Sugar, and Avadh Sugar, are trading at record highs.

Not just these sugar stocks, but other sugar shares too saw phenomenal growth after the government announced ethanol blending date. This comes after the government had brought forward the target date for achieving 20 per cent ethanol-blending with petrol by two years to 2023 in the beginning of June. The move was to help reduce India's dependence on costly oil imports, according to official notification. Last year, the government had set a target of reaching 10 per cent ethanol-blending in petrol (10 per cent of ethanol mixed with 90 per cent of diesel) by 2022, and 20 per cent doping by 2030. Earlier this year, the target for 20 per cent blending was brought forward to 2025.

Meanwhile, as per Chetan Bhutani of Zee Business, the central government has begun discussing the proposal for increasing Fair & Remunerative price (FRP ) for Sugarcane. Multiple officials confirmed that the discussions on increasing FRP have begun. Government is likely to increase the FRP in the range of Rs 8 to Rs 12. The final decision to increase the Fair and Remunerative Price (FRP) of sugarcane for the 2021-22 marketing year (October-September) will be taken up by Cabinet Committee on Economic Affairs (CCEA) said sources.

Sources said that the initial recommendations from the Commission for Agricultural Costs & Prices have come and now we will take it up with the ministries concerned. Discussions will be held between Ministry of Agriculture, Finance, Niti Aayog and Department of Food and Public distribution. Post the discussions, a cabinet note will be sent for approval and then the rates will be notified. The Centre in August 2020 increased the minimum price sugar mills pay to sugarcane growers by Rs 10 to Rs 285 per quintal.

Meanwhile, Zee Business Managing Editor Anil Singhvi talking about FRP development said this is in fact a negative news as far as sugar shares/companies are concerned." With the increase in FRP, sugarcane will get costlier and these sugar companies will either have to increase the price or their margin will go down. So, this has to be seen as negative development and not positive one," said the Market Guru.

Market expert Sandeep Jain recommended investors to hold their shares and wait for 'declines' for fresh positions. "Overall, it is not a positive news, but these developments keep happening. I don't think fundamental decision on this front should affect investing decisions much," said Jain.