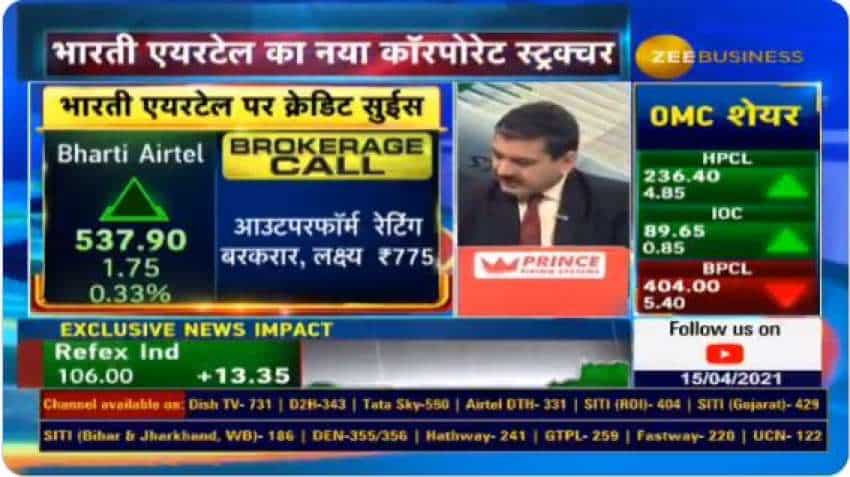 Brokerage firm Credit Suisse has a favourable view on Bharti Airtel and it has maintained a rating of Outperformed, Gupta said. It has given a target price of Rs 775
Written By: ZeeBiz WebTeam
Edited By: ZeeBiz WebTeam
RELATED NEWS

There is a growing focus now on the digital services and there will be a lot of focus on the value unlocking, Gupta said. Likening this to the Reliance Jio move where many new investors have invested, Gupta said that Bharti Airtel is could also see investments from foreign investors as is being estimated by top analysts.

Under this corporate restructuring, the company has made 4 verticals – one is the digital assets which will be included in these verticals, he further said. Some of its top digital assets include Wink Music, Airtel Thanks, Airtel X stream and Mitra Payments. All these will come under one portfolio. There broadband and telecom portfolio will come under a separate vertical, he added. Under its subsidiary Airtel Limited businesses related to mobile, broadband and enterprise business will come. Its DTH business is likely to remain in this Airtel Limited subsidiary. Airtel Payments Bank Limited will also remain part of its Indian business, he said.

In the foreign business, it has a subsidiary called Airtel Africa. Meanwhile, Bharti Airtel Lanka and the Bangladesh operations will come under its foreign business vertical.

The fourth vertical is the infrastructure business under which it has Indus Tower and the data center business.

Brokerage firm Credit Suisse has a favourable view on Bharti Airtel and it has maintained a rating of Outperformed, Gupta said. It has given a target price of Rs 775. This stock was trading at Rs 537 at the time this report was filed.