After Polycab India share price gains 12% in 5 days, here is what Kushal Gupta has to say

Polycab India share price is witnessing continuous gains over the last few days. Market expert Kushal Gupta has revealed the reasons behind this surge and why the company is in focus today. 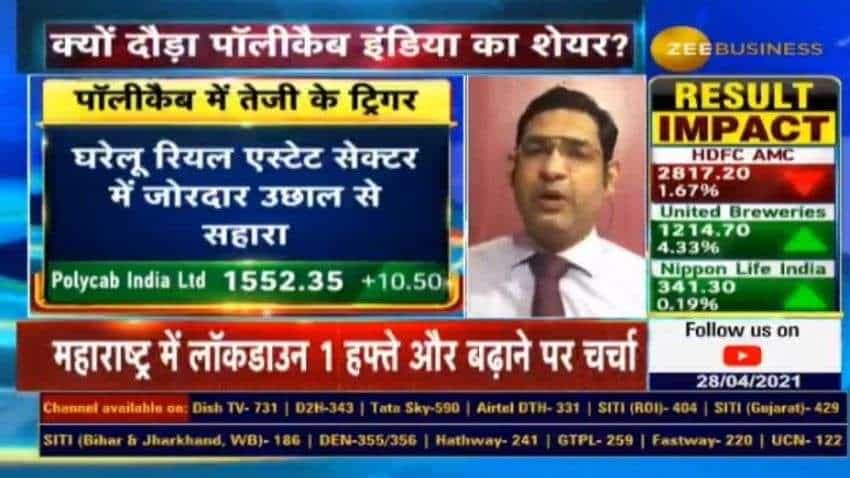 Polycab India share price is witnessing continuous gains over the last few days. Market expert Kushal Gupta has revealed the reasons behind this surge and why the company is in focus today.

Kushal said that from the last five days the company is showing a positive trend with a growth of 12 percent. He said that because of the growth triggers the shares of the company are in focus.

Explaining the triggers behind the upward movement, he said that the market share of around 18 to 20 percent of the company is in the cable and wires segment and it is expected to remain stable and the management is very confident in this regard.

The second trigger is that the company is likely to witness a growth of 16 percent CAGR in the coming two years. The third biggest reason to consider the stock of Polycab is its high margin of fast moving electrical goods 'FMEG' products segments as the company is continuously expanding its capacity in this area, he added.

He further added that because of this capacity expansion, the margins of the company are also going through a correction. He added that the cash and investments of Rs 50 crore in FY18 can see a significant growth till FY23.

The revenue of the company is also expected to register a growth of more than 30 percent from FY21 to FY23, he said.

Apart from these triggers, the margin trend of the company is also assumed to be on the positive side. Hence, the financials front and the growth triggers of the company have kept the stock in focus, Kushal concluded.