"In exactly two months, more than 5 crores (or 50 million) workers have registered at the e-Shram portal," the Ministry of Labour and Employment said in a statement. 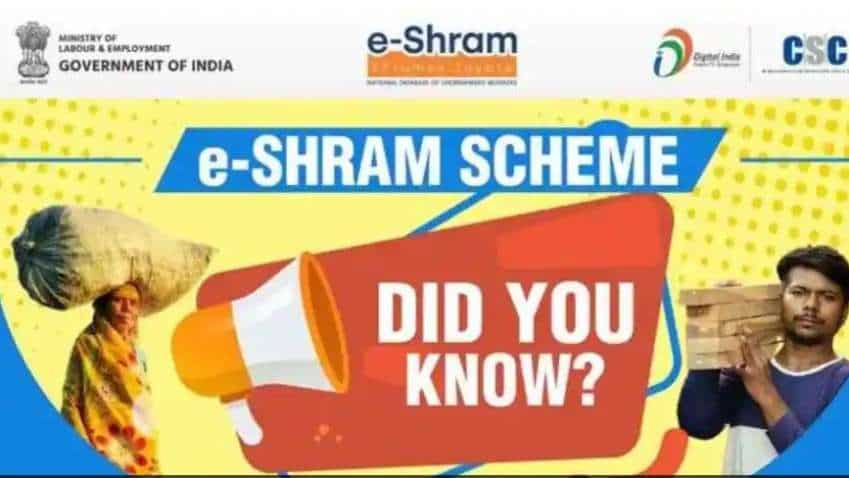 All unorganised workers, including migrant workers, can now take the benefits of various social security and employment-based schemes through registration on the e-Shram portal

The government on Tuesday said over five crore people have registered in two months on the e-Shram portal, which is India's first national database on unorganised sector workers.

"In exactly two months, more than 5 crores (or 50 million) workers have registered at the e-Shram portal," the Ministry of Labour and Employment said in a statement.

Workers in diverse occupations such as construction, apparel manufacturing, fishing, gig and platform work, street vending, domestic work, agriculture and allied activities and transport sector have registered on the portal, it added.

In some of these sectors, an overwhelming proportion of migrant workers are engaged.

The largest number of workers registered are from agriculture and construction sectors, given the sheer volume of these two sectors in employment generation in the country.

All unorganised workers, including migrant workers, can now take the benefits of various social security and employment-based schemes through registration on the e-Shram portal.

As per live data, 5.72 crore workers have registered on the portal. Of these, around 50.94 per cent beneficiaries are female and 49.55 per cent male.

There has been weekly improvement in the registrations by gender, with men and women workers registering at comparable proportions.

As per the latest data, the states of West Bengal, Odisha, Uttar Pradesh, Bihar and Madhya Pradesh are at the forefront of this initiative with highest number of registrations, the ministry stated.

However, it stated that this number has to be put into perspective, as smaller states and union territories (UTs) understandably have lesser number of workers.

Also, this drive needs to gain momentum in states and UTs such as Meghalaya, Manipur, Manipur, Goa, Chandigarh, Himachal Pradesh and Tripura, it added.

For online registrations, individual workers can use e-Shram's mobile application or the website.

They can also visit the Common Service Centres (CSCs), State Seva Kendra, Labour Facilitation Centres, and selected post offices of the Department of Posts' Digital Seva Kendras, to register themselves on this portal.

After registration, the unorganised workers shall receive a digital e-SHRAM card with a Universal Account Number.

This Universal Account Number will be acceptable across the country and they will not be required to register at different places for obtaining social security benefits.

If a worker registered on the e-Shram portal meets with an accident, he/she will be eligible for Rs 2 lakh on death or permanent disability and Rs 1 lakh on partial disability.

A substantial proportion of registration has been facilitated by the CSCs (77.66 per cent).

The ministry added that in certain states like Kerala, Goa, Meghalaya and Manipur, a greater proportion of individuals have self-registered on the portal.

Similar is the case with most UTs like Dadra and Nagar Haveli, Andaman and Nicobar and Ladakh. This can be attributed to higher levels of literacy and technology usage in these regions.

Labour Minister Bhupender Yadav, Minister of State for Labour Rameswar Teli and senior officials are holding several interactions with unorganised workers and trade union leaders to encourage them to register on the portal and avail the various benefits.

Meanwhile, the Chief Labour Commissioner's office under the Ministry of Labour and Employment also organised a camp at Ahmedabad, Gujarat for divyangjan (specially-abled) workers and an overwhelming response was received.

Chief Labour Commissioner (Central) has also given directions to all the field formations under CLC office to organise special camps for e-Shram registration of divyangjan workers in the country.

e-Shram Registration: Are farmers eligible to register on the portal? Know details here

e-Shram: How many people can register with one mobile number? Know process, other details here