Chenab Arch Bridge in Jammu and Kashmir: WATCH this video by railways to know all about world's highest rail bridge arch, 30-mts higher than Eiffel Tower 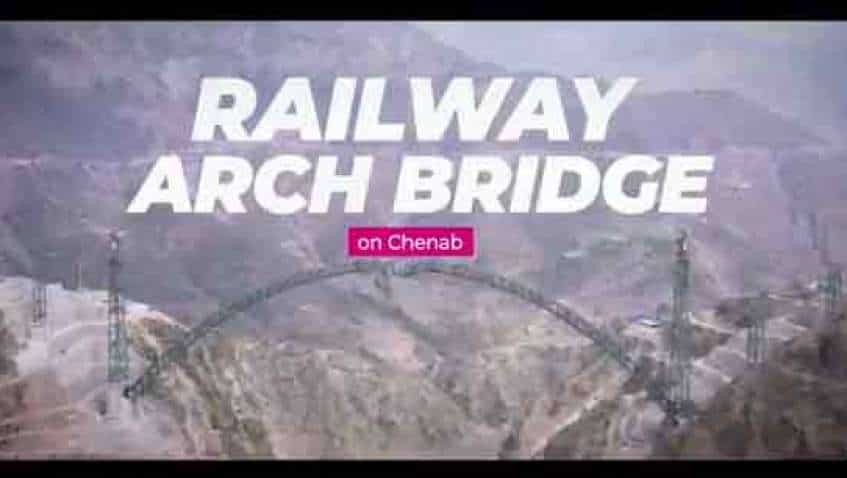 The steel arch of rail bridge over Chenab River in Jammu and Kashmir is reaching its completion stage and has several 'firsts' to its name. It is being built over River Chenab in Jammu and Kashmir. Once completed, the rail arch bridge will connect the Kashmir Valley with the rest of the country.

The Ministry of Railways posted a video from its official Twitter handle that sort of gives you glimpse about all you need to know about this Engineering Marvel.

Sharing the video, it wrote, " Railway Arch bridge on Chenab: Watch this video to learn some interesting facts about the highest arch Railway bridge in the world."

Watch this video to learn some interesting facts about the highest arch Railway bridge  in the world. pic.twitter.com/2uWs3lGmbj

Earlier in late February, the Ministry of Railways has informed about progress of the projcet.

Popularly known as Anji Khad Bridge, the country's first cable-stayed Indian Railways bridge, will come up on Udhampur-Srinagar-Baramulla Rail Link (USBRL) section of Northern Railway in Jammu & Kashmir. The project is being developed by the Konkan Railway.

On the same day in February, Railways Minister Piyush Goyal also took to Twitter to inform public about it. He wrote," Infrastructural Marvel in Making: Indian Railways is well on track to achieve another engineering milestone with the steel arch of Chenab bridge reaching at closure position. It is all set to be the world's highest Railway bridge  Bridge at night."

It is the most challenging project in the post-independent history of the national transporter, Konkan Railways had said. News agency PTI had quoted Sanjay Gupta, Chairman Konkan Railway, saying that the world’s highest railway bridge, connecting Kashmir with the rest of India through a rail line will be completed by December 2021.

At 359 metres above Chenab, this rail bridge will also be 30 meters higher than the iconic Eiffel Tower in Paris, France.