Narendra Modi said crores of people are behind the success of GST and the implementation of the new indirect tax regime is an example of the benefits that can be reaped if there is cooperative federalism in place between the Centre and states. 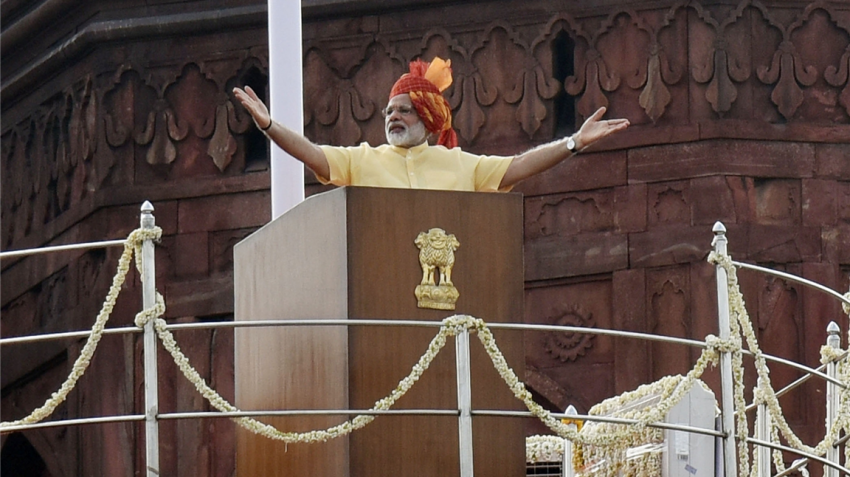 Prime Minister Narendra Modi addresses the Nation on the occasion of 71st Independence Day from the ramparts of Red Fort, in Delhi on August 15, 2017. Photo: IANS
Written By: PTI
RELATED NEWS

The abolition of inter-state check posts after the implementation of GST has reduced time for movement of goods by 30% and saved thousands of crores of rupees, Prime Minister Narendra Modi said today.

The Goods and Services Tax, which unified more than a dozen central and state levies, is a result of cooperative federalism and its smooth rollout from July 1 has increased efficiencies of business, he said.

Addressing the nation from the ramparts of the Red Fort on the occasion of 71st Independence Day, Modi said technology has made the rollout smooth in a short span on time.

"Trucks (carrying goods) are saving 30% (travel) time post GST as check posts have been removed. This has helped save thousands of crores of rupees and more importantly time," he said.

Business efficiency, he said, has increased. "Efficiency has increased in transport sector by 30% and because of GST such a big change has happened," he said.

The biggest tax reform since Independence, GST was rolled out from July 1. The new indirect tax regime has subsumed over a dozen state and central levies like excise duty, service tax and VAT, and has replaced them with four tier tax structure of 5, 12, 18 and 28% for goods and services across the country.

GST has removed inter-state barriers to convert India into a single market where goods and services can flow seamlessly.

State border check posts scrutinised material and location-based tax compliance, resulting in delays in delivery of goods and cause environment pollution as trucks queue up for clearance.

Modi said crores of people are behind the success of GST and the implementation of the new indirect tax regime is an example of the benefits that can be reaped if there is cooperative federalism in place between the Centre and states.

"Technology is a miracle. Some find it astonishing that GST has been rolled out in such a vast country in such short span of time," he said.

He said in initiatives like GST, ease of doing business and cleanliness drive, the Centre and states have worked shoulder to shoulder to make them a success. He said the steps taken by the government will benefit the country and with GST the country will benefit.

Modi said there was a time when the Centre and states used to fight over allocation of urea and kerosene.

The Central government, he said, had a "big brother" approach towards the states. But all this is a thing of past with increased urea production in last three years and alternate LPG and natural gas usage cutting down kerosene demand, he said.

"Since I have myself been a Chief Minister for long, I know that states are important for the growth of a country. I understand the importance of chief ministers and state governments.