Prime Minister Narendra Modi on Sunday launched physical distribution of property cards under Survey of Villages and Mapping with Improvised Technology in Village Areas (SVAMITVA) scheme through video conferencing and interacted with the beneficiaries of the scheme. 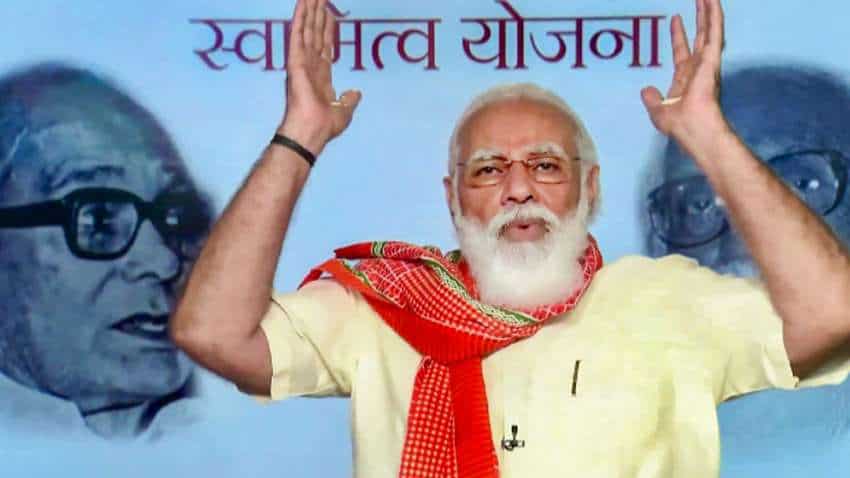 Prime Minister Narendra Modi on Sunday launched physical distribution of property cards under Survey of Villages and Mapping with Improvised Technology in Village Areas (SVAMITVA) scheme through video conferencing and interacted with the beneficiaries of the scheme.

Prime Minister wished the beneficiaries of ‘SVAMITVA Scheme' who have got property cards of their houses today and said now the beneficiaries will have a right, a legal document of owning their houses. The scheme is going to bring historical changes to the villages in the country. He added the country has taken another major step towards an AtmaNirbhar Bharat, as the scheme helps in making rural India self-reliant.

He said one lakh beneficiaries from Haryana, Karnataka, Madhya Pradesh, Maharashtra, Uttarakhand and Uttar Pradesh have been handed over the legal papers of their houses today and promised to give such property cards to every household in the next three - four years in every village of the country.

Prime Minister expressed happiness of distributing property cards on the birth anniversary of two great leaders, Jai Prakash Narayan and Nana ji Deshmukh. He added the birth anniversary of these two great men did not just fall on the same date, rather their struggle and ideals were also similar. He recalled that both Nananji and JP fought their entire lives for empowerment of Rural India and the poor.

Recalling Nanaji’s words “when the people of the village remain trapped in disputes, neither they will be able to develop themselves nor the society” Modi said he also believed the ownership will become a great medium to end many disputes in our villages.

Prime Minister said ownership of land and house plays a big role in the development of the country. He added when there is a record of property, citizens gain confidence and new avenues of investment open.
Loan is easily available from the bank on record of property, employment and self-employment avenues open. But the difficulty is that today only one third of the population in the world has a record of their property legally. He added the property card will clear the way to buy and sell property without any dispute for the villagers. He said today we have so many youths in the village who want to do something on their own. After getting the property card, easy access to loans from banks on their houses would be ensured. He said with the new technology like using drones in mapping and survey, accurate land records of every village can be created. Due to accurate land records, development related work in the village will also be easier which would be another benefit of these property cards.

Prime Minister said ‘SVAMITVA Scheme' will help in strengthening the Panchayati Raj system for which efforts are underway for the past 6 years. He listed the initiatives taken for strengthening the Gram Panchayats in the past 6 years and said SVAMITVA Scheme will make village management easier for our gram panchayats, in a systematic way like municipalities and municipal corporations. He said in the last 6 years, continuous efforts were made to remove chronic shortages in the villages.

He said an unprecedented level of development has taken place in the villages in the last 6 years which has not happened in the last seven decades of independence. He listed the benefits villagers got in the past 6 years like having a bank account, getting electricity connection, access to toilets, getting gas connection, having a pucca house and having a piped drinking water connection. He added that a major campaign to connect every village in the country with the optical fiber connection is also going on at a fast pace.

Criticizing the opposition, the Prime Minister said those who do not want our farmers to become self reliant are having problems with the reforms in the agricultural sector. With the introduction of Kisan Credit Cards to Small farmers, Cowherds and fishermen the brokers and middlemen are having problems, as their illegal income has stopped. He also listed the initiatives which have stopped leakages like Neem coating of urea, Direct Benefit Transfer to the bank account of farmers, etc. and said those affected by the plugging of leakages are opposed to agricultural reforms today. He said development in the country is not going to stop due to them and will continue to make the village and the poor self-reliant. He added the role of ‘SVAMITVA Scheme' is also very important for the accomplishment of this resolution.